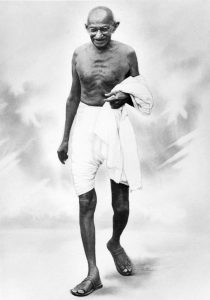 October 2nd, 1869, is etched in gold in the annals of history. The day marks the birth of M. K Gandhi, a man who influenced the course of the world like no other. His ideals of transparency, adherence to truth and non-violence, and resistance to evil with fearlessness and love point to a spiritually inspired life built on the rocks of indomitable spirit.

Gandhi’s life can be considered a moral saga in its own right. Though strained with rebellions, ethical dilemmas, and criticisms from recalcitrant followers, he lived with poise and moral rectitude unseen in any leader before or after him. Nevertheless, his life and ideas are slowly pushed, sometimes intentionally, behind the veils of oblivion.

Any ambitious effort to portray Gandhi’s proverbial many-sidedness in a few words would fall short because of its sheer grandeur and would be deemed grossly inadequate. However, what is Gandhi for a violent, biased, and self-serving world can be glimpsed if we bother to open our eyes.

Gandhi is a reminder that fearlessness is not a feat of physical strength but the trait of an indomitable spirit. He demonstrated that a determined mind could stand resolute in the face of a legion of mighty foes. One has to be deep-rooted in truth and non-violence.

Gandhi is a reminder that violence and evil are to be fought with non-violence and love. Even when he was ignored, ridiculed, and beaten until his bones broke, he adhered to non-violence. Through non-cooperation, he showed that evil can be purged with love.

Gandhi is a reminder that a minimal life is the path towards happiness. In a world that envies opulence, he lived with less than ten possessions. Walking bare-chested, clad only in a loincloth, he proclaimed, “The Earth has enough for everyone’s need but not for everyone’s greed.”

Gandhi is a reminder that one can live pleasantly and see the lighter side of life, even in the face of atrocity. His irresistible sense of humor and optimistic flair made him a delight. Egoless and nonpretentious, he did not spare anyone, even himself, from his sweet rod of humor.

Gandhi is a guiding light for anyone who seeks truth. He thought deeply about the nature of truth and pursued it throughout his life. Truth, for him, is God, and seeking it wholeheartedly, his religion.

Gandhi is a guiding light for those suffocated by social inequality. Living with the outcasts, he recognized their problems and worked to uplift them. By proclaiming ideas like Sarvodaya, Swaraj, and Self-reliance, Gandhi envisioned the kingdom of God on earth.

Gandhi is a guiding light for those trampled under the boots of oppression. He lived for the persecuted and elevated their spirits and called them to follow a nonviolent form of resistance. Urging them to be fearless, he asked them to believe in the goodness of the oppressors and conquer evil with love and truth.

Gandhi is a guiding light for anyone venturing to purify politics. He proved that a leader could at once be wise, secular, and transparent. Uniting his spiritual quest with the national cause, he showed that one could lead a life of a saint and a politician simultaneously.

Gandhi left us with a legacy of unparalleled selflessness. Fighting for the causes of his fellow men, he never stopped to think about himself, or his family for that matter. He is the kind of leader who comes but once in a century, even in a millennium.

Gandhi left us with a legacy of philosophical thinking. He thought deeply on topics like how to build a nation, avoid oppression, make an honest living, and other facets of human life. Combining his spiritual values with his experience and observations, he forged unique philosophies on each subject.

Gandhi left us with a legacy of moral rectitude. He stood firm against all injustice in society without yielding to any temptation. Taking up a vow of celibacy, Gandhi proved that a man could purge his passions. With an unblemished political career spanning more than half a century, he proclaimed with a steady voice, “My life is my message.”

Gandhi left us with a legacy that is still luminant, despite the malicious efforts of fanatics and war-mongers to erase from the history books. This frail man’s life, philosophy, and strength of character will perennially inspire generations of earnest seekers of truth and non-violence.

Thank you for reading. If you are interested to know more about Gandhi and his life, I have written a detailed account about it as a 20 part blog series. Please check it out.

2 thoughts on “Gandhi: Remembering the Mahatma”