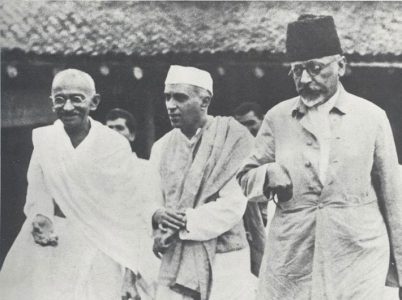 World politics has fallen into such depths that the term politics often evokes a negative impression in many. Sectarianism, bigotry and fascism have crept into politics and made it repugnant. The ostentatious leaders with their shallow words and fake promises have contributed their part too.

In this context, it is necessary to discuss the political principles that inspired the world with its insight and morality. Gandhi, a political thinker and icon, developed a deep philosophy rooted in his spirituality. Surely, Gandhian politics can give guidance to the disoriented world today.

The question whether Gandhian political theory is original or adopted is moot. It is true that Gandhi did wide research in world politics and had his opinions about popular political theories. He also had a great understanding of ancient Indian culture and scriptures. It is safe to conclude that he succeeded in amalgamating the two and came up with a unique political view.

Gandhi inspired generations with innovative ideas like Satyagraha (passive resistance), Ahimsa (non-violence), Swaraj (home rule), Swadeshi (indigenous production), Sarvodaya (universal upliftment), dharma (selfless service) and so on. But he himself denied being original and attributed all credit to Indian philosophy.

As a spiritual person, Gandhi saw politics as a path towards Truth. Hence all the philosophies that he formulated were focused on righteousness. Nevertheless, the cumulative effects of his movements combined with the vigor it instilled in people because of its inherent nobility, ultimately succeeded.

Anthony J Parel, Canadian historian and academic, is of the opinion that Gandhi’s greatest contribution is that he bridged the gap between secular and spiritual in his own unique way. As a spiritual person, Gandhi believed his political actions as a way to seek the ultimate truth. At the same time, the humanism that he upheld made him secular. These two qualities reflected in Gandhian political theory.

The second important contribution is that Gandhi sanctified politics. With his selflessness and moral rectitude, he set a high standard for the generations of politicians that came after him. Adopting hard measures to purify his thoughts Gandhi advocated that a leader should be pure of heart to represent his fellow men.

Another important contribution is that he changed the mode of political struggle. Before Gandhi, all revolutions resulted in bloodshed and thousands lost their lives before any movement reached fruition. However Indian freedom struggle chose a path of non-violence envisaged by the Mahatma. Its success proved to be a revelation and many like Nelson Mandela, Martin Luther King Jr adopted the method and proclaimed its effectiveness.

Outlook towards other philosophies

Gandhi was respectful of the western political theories and had a deep understanding of it. But he did not confine himself to any particular schools of thought. Many argue that he held essentialist political views which he derived from the Indian tradition. But many political theorists are of the opinion that it is not completely true.

Though Marxist reductionism and interpretation of history did not inspire Gandhi, he was ready to adopt the good values Marxism upheld. He respected the idea of social servant identifying himself with the poor and oppressed people but rejected their materialism. He writes:

…my quarrel with the Marxists is that even if the paradise of material satisfactions, which they envisage as their final goal, were realized on earth, it would not bring mankind either contentment or peace. But I was wondering whether we cannot take best out of Marxism and turn it to account for the realization of our social aims.

Gandhi never supported the large scale production and subsequent urbanization of India through socialism. He believed the soul of India rests in villages and their traditions. So instead of industrialization, he modified the concept by stressing self-employment and self-reliance which later came to be known as Gandhian Socialism. He wrote about these in detail in his book Hind Swaraj (Indian Home rule).

Socialism was not born with the discovery of the misuse of capital by capitalists. As I have contended, socialism, even communism, is explicit in the first verse of Ishopanishad. What is true is that when some reformers lost faith in the method of conversion, the technique of what is known as scientific socialism was born. I am engaged in solving the same problem that faces scientific socialists.

It is true, however, that my approach is always and only through unadulterated non-violence.

Gandhi was against staunch nationalism. As a pacifist, he understood the dangers of extreme love for a geographical area. He always warned his followers about it.  According to him

‘..it is not the nationalism that is evil, it is the narrowness, selfishness, exclusiveness which is the bane of modern nations which is evil.’

Gandhi pointed out the flaws of fascism and worked to mitigate its spread. As a staunch believer of equality, he rejected the concept of racial supremacy. He even wrote a letter to Hitler pleading him to “stop the war on humanity”

Gandhi praised the discipline of the parliamentary system that the British and the other world governments followed. But he was not blind to the hedonism that affected western politics. He was also against the egocentric politicians who did not have a strand of service mentality in them.

Gandhi was attracted by democratic principles and believed the ruling power should reach the ‘grass-root level’. He thought long and hard and Indianized the concept according to its cultural tradition. He stood for forming Gramsabha (Village assemblies) with representation from the ‘poorest of the poor’ in the society.

Though he rejected it, Gandhi is one of the most influential political theorists in the Indian canon. He formulated and experimented with different ideologies and held distinct opinions on each of them. Combining them with his spirituality, he formed a unique ideology rooted in righteousness and humanity.

Unfortunately, his ideas are undervalued in the present world which is moving towards extreme right-wing ideologies. The resurgence of Fascism in different forms and self-centered showmen masquerading as leaders catalyzed the disintegration of politics. Presently it is decaying to its most sinister form.

If we want to curb such a dangerous situation, we should look up to Gandhi. Meditating on his thoughts will elevate ourselves and clear our vision to see that politics, service and spirituality are just different paths towards the ultimate truth. Such clarity can surely create a new world order; one that is based on love and truth like Gandhi envisioned.