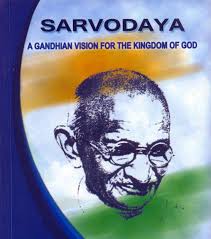 …Revolution takes place as a result of individuals beginning here and now to live the values of the new society. Through co-operative effort the people proceed to create new institutions and new forms of social life.

Gandhi was a revolutionary in every sense of the word. His views on politics, spirituality and religion were radical and influential. The search for the ultimate truth was the undercurrent of all his ideologies. Sarvodaya is the reassertion of his commitment to truth and service towards humanity. The movement aimed at the social, economic and spiritual development of the society.

India at the time, was steeped in poverty due to colonial looting that went on for almost two centuries. Gandhi understood that eradication of poverty is his first preference. But attaining economic stability will not create a just society.  He thought long and hard about this dilemma and came up with a solution.

In his book titled Hind Swaraj, he put to words his concept of Purna Swaraj (Complete Home rule). Rather than mere emancipation from colonial rule, Purna Swaraj aimed at the moral and economic development of the nation. He envisioned four nomological axioms for achieving this: Sathya(truth), Ahimsa( non-violence), Anasakthi (nondesire)and Sarvodaya (Universal Upliftment).

Inspiration for the idea

Gandhi came up with his idea of Sarvodaya after reading Unto This Last by John Ruskin. The book was gifted to him before a 24-hour train journey to Durban by a British friend. The inlaid concepts completely captured Gandhi’s imagination.

He summarised what he learned thus:

The first of these I knew. The second I had dimly realized. The third had never occurred to me. Unto This Last made it clear as daylight for me that the second and third were contained in the first. I arose with the dawn, ready to reduce these principles to practice.

– The Story of My Experiments with Truth- M K Gandhi

Gandhi spent many sleepless nights brooding over the ideas in the book. What sparked in him as inspiration, fueled by his altruism, went on to become a raging fire. Many great thinkers like Vinobha Bhave, Jai Prakash Narayan inspired by his concept became the messengers of the ideology.

A Vision for Social Welfare

Gandhi’s understanding of human society was tantamount to that of a sociologist. After wide research and observation, he developed unique views for the overall goodness of society. As everything with Gandhi, morality, non-violence and adherence to truth acquired the center stage in his social philosophies too.

Gandhi coined the word by combining the Sanskrit word ‘Sarva‘,  meaning universal and ‘udaya’, meaning upliftment. Later when he translated Unto this Last in his native language Gujarati, he gave it the name Sarvodaya.

Sarvodaya aimed at blotting out the suffering in society using the Gandhian moral approach. It preached not just social welfare and equality through selfless service but aimed at universal well-being.

The features of Sarvodaya are trusteeship, economic equality and networking. Gandhi believed that if these can be achieved, the differences in class and race will disappear. The decentralization of power will give rise to partyless politics.

Sarvodaya envisions that the rich should act as trustees of their own wealth. They can use it for their strict personal needs and the rest should willingly be distributed for the welfare of the society. Gandhi believed trusteeship will end exploitation, social and economic conflicts and privileges.

“If you want to be perfect, go, sell what you have and give to the poor, and you will have treasure in heaven; and come, follow Me.”

Sarvodaya promoted selfless and spontaneous sharing above confiscating the wealth from the rich. Such compassionate giving will be a joy for the giver and satisfy the receiver. This equality attained through love and non-violence will remain perennial in society.

Gandhi understood that the growing gulf between the rich and the poor is the root cause of social unrest. In order to purge society, there should be economic equality. Hence, Sarvodaya dictates that all the property should be owned by the community rather than the individual. Everyone gets an equal share without any privileges based on caste, religion, education, talent and so on.

Nevertheless, Sarvodaya does not promote laziness. Everyone is expected to do manual labor in one form or the other.

Gandhi opposed the idea of the institutionalization of Sarvodaya. He maintained that it is a philosophy to be imbibed rather than a policy to be implemented. Only someone who is selfless and non-violent can truly be a sevaka (servant) of the society. Gandhi never supported the forceful implementation of his ideologies.

After Gandhi’s martyrdom, however, Sarvodaya developed into an organization all over the world. Under Vinobha Bhave, Gandhi’s disciple, it launched Bhoodan movement which encouraged the rich to donate the land for the homeless. The movement became a huge success in India.

More than just a morally charged ideology, Gandhian Sarvodaya had distinct views on political and social structuring of the society. It advocates for social transformation through three axioms: philosophical anarchism, partyless democracy and decentralization.

Gandhi understood that the state operates mostly through intimidation, coercion and prosecution. Sarvodaya emphasized the moral sovereignty of people, The idea of swaraj is not based on centralization of ruling power to a few but the development of self-government.

Sarvodaya anticipated the evils of party politics. The dictatorship of the cabinet and party oligarchy is sure to take away the essence of democracy. Hence, Sarvodaya advocates a partyless system of governance.

If democracy is to be effective the power should never be concentrated. Sarvodaya envisages a decentralization of power by universalization of self-government. With selfless cooperation and active participation, common people should be elevated to govern themselves.

Sarvodaya considers lust for power and wealth repugnant. It is also against egoism and class struggle. Instead, it dictates selfless service and mindful sharing. Gandhi taught moral reformation achieved through love and non-violence above violent and bloody revolutions.

The concept of Sarvodaya had unique stands on democracy too. In the fear that minorities will be trampled by the majority, Sarvodaya preferred consensus above majoritarianism. Rather than superficial adherence to the numerical criteria of percentages, a society should be focused on its overall goodness.

Sarvodaya in the Modern World

Many today believe that Gandhian Sarvodaya is utopian and impractical. The level of morality and selflessness that the concept demands is surely quite high. But human civilization has proved time and again that an immoral society focused on materialistic opulence is doomed to fail. We still see the dissatisfaction and unrest in the capitalistic and consumeristic countries.

The Gandhian belief that a morally charged society is the only sustainable model is undeniable. It is quite shameful that we only focus on the economic stability of the society while we make policies when people are in dire need of moral guidance. A society should be uplifted to shed unwholesome competition, greed, exploitation and class hatred. That is the goal of Sarvodaya.

Don’t we all crave for that Kingdom of God that Gandhi envisioned?

12 thoughts on “Sarvodaya: A Gandhian Vision for the Kingdom of God”