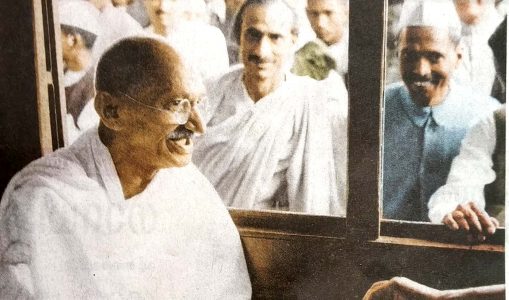 “Man is not born to live in isolation but is essentially a social animal independent and inter-dependent. No one can or should ride on another’s back.”

As a revolutionary who valued freedom, Gandhi dedicated his life to lead masses to redemption from all kinds of oppression. He believed that to achieve emancipation, the people have to attain self-sufficiency. He formulated elaborate concepts for this purpose.

He derived inspiration from great thinkers like Tolstoy. Yet Gandhian idea of self-reliance is unique as he combined his personal experiences, research and observation to formulate the idea.

It hence conformed to the moral, spiritual and minimalistic ideas of Gandhi. Thus it became one of the core Gandhian ideologies.

Arriving at the idea

Born to an aristocratic family, young Mohandas relied on his servants for all the chores. His student life in London and his job in South Africa introduced him to a different world.

While he was in South Africa, Gandhi started washing his clothes against the conventions of the time. Later, when a barber refused to touch his hair because he was a Koolie (a derogatory term used to address Indians), Gandhi decided to cut his own hair.

Though at first, these efforts made him a laughing stock among his colleagues, he gradually mastered the techniques. When he came back to India, he learned weaving clothes with a hand-operated charka. Since then he only wore the clothes spun by himself.

Tolstoy’s idea of self-sustaining villages influenced Gandhi. Inspired by the notion he started a small settlement with his friends in South Africa and named it Tolstoy Farm. It was the precursor of the Gandhian ashrams in India like Sevagram, Wardha, Sabarmati and so on.

“In order to realize this equality, today people should be able to produce their own necessaries of life, i.e., clothing, foodstuffs, dwellings and lighting and water.”

Gandhian concept of self-reliance was twofold. It focused on self-sufficiency on a community level and on a personal level.

To achieve Swaraj or complete independence, Gandhi believed that all villages should be self-sufficient. It should have agricultural facilities and cattle to feed its population. Adequate medical facilities should also be available in every hamlet. The elders in society should educate the young generation and give them vocational training.

Gandhi advocated that small scale industries should generate enough income to sustain the village. The primary aim of these industries should be to provide necessary goods to the community. Excess produce can be exchanged with nearby hamlets in return for unavailable products. Nevertheless, maximizing the profit should not be the driving force of the industry.

“Our first duty is that we should not be a burden on society, i.e., we should be self-dependent. From this point of view self-sufficiency itself is a kind of service. After becoming self-sufficient we shall use our spare time for the service of others. If all become self-sufficient, none will be in trouble.”

Gandhi appealed to his disciples to be independent, even on a personal level. He encouraged his followers to learn cooking, washing clothes and agriculture. Other skills like building houses, weaving clothes, making footwears, candles and soaps were taught. He also made sure that people knew methods to treat illness and give first aid. Everyone in the ashram had to take part in cleaning and other chores.

Gandhi feared the centralization of power. He knew that absolute power corrupts even the most ideal leaders. The rotten games the democratically elected politicians played to consolidate their power and blindfold the poor repulsed him.

Hence Gandhi advocated for decentralized governance. Every village should have a local self-governing body led by the elected representatives of the people. The general population must be empowered and enabled for making every decision regarding the village.

“In its totality, democracy, therefore, implies that any democratic structure entrusted with the task of development and administration is expected to be not only democratically constituted according to the principle of election but should also reflect people’s free will and function according to the element of democracy both in their constitution and in their day-to-day functioning.”

“Self-sufficiency does not mean narrowness. To be self-sufficient is not to be altogether self-contained. In no circumstances would we be able to produce all the things we need. So though our aim is complete self-sufficiency, we shall have to get from outside the village what we cannot produce in the village;…”

The Gandhian idea of self-reliance gave rise to many misconceptions. Gandhi was labeled as a conservationist and his ideas were considered to weigh down the fast progress of the country. Moreover, many argued that it can create self-serving islands inside a nation.

In fact, Gandhian self-reliance cannot be translated as self-centeredness. A village deficient of resources will have to rely on the adjacent one for its sustenance. Gandhi dreamt of a brotherhood that develops between different communities through the transfer of goods and services.

It is true that Gandhi was against greed and maximizing profit. He wanted the villages to have small scale production units that sustained its population. He abhorred mass production through industrialization that resulted in mindless exploitation of nature.

“Unless this is done, there will be starvation.”

Gandhi foresaw that until the villages attained self-sufficiency, a large population will struggle for survival. Time has proven that Gandhi was right. If his notion of self-reliance was practiced, the world could have saved millions from hunger. Yet we still run in circles around capitalism and industrialization that polarize the economy.

If the society can adhere to the Gandhian axiom, we can stay afloat during any economic turbulence. During the post-pandemic depression, self-reliance may be the only thing that we can resort to to stabilize our life.

Thank you for reading. I would love to know your thoughts on the article. Please post them in the comment box below.