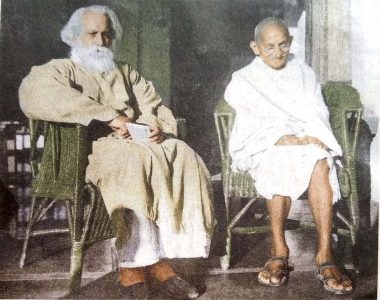 “Gandhi combined in himself the dual role of a saint and an active politician.”

If there is one thing that stands out about Gandhi, it is his staunch adherence to a moral life. Being a deeply spiritual person he could not sidestep religion which was deeply ingrained in the Indian soul.

For him, religion and spirituality were one. Hence he used both terms interchangeably. He frequently quoted Bhavatgita and boldly declared that he is a Hindu. This has contributed to many communal forces portraying him as a member of their creed.

A glimpse into Gandhi’s concept of religion proves that nothing can be  farther from the truth.

Born in an orthodox Bania family, Gandhi was brought up in Sanatani Vaishnavism — a Hindu ideology placing God Vishnu as Supreme. Thus he learned Ramayana, Bhagavat Gita and Manusmriti even before he reached puberty.

Gandhi’s mother was a deeply religious woman who fasted frequently for days. His father was a diwan and was known for his uprightness. These two individuals instilled a strong morality in young Mohandas.

There was another factor that contributed to his character. A drama which depicted the life of Raja Harichandra —  an honest Indian king who had to give up all riches because of his affinity to the truth —  deeply moved young Mohandas. He resolved to uphold truthfulness like the legendary king.

View of other religions

While he was in India, Mohandas was not much exposed to religions save his own. He had seen proselytism by Christian missionaries and thus developed an aversion to Christianity. As a child, he believed all Christians are meat-eaters and heavy drinkers. He had a rudimentary understanding of Islam and Buddhism.

When he studied law at the University of London, he befriended many Christians in the Vegetarian Society circle, who changed this perspective. From them, he got a Bible and was captivated by the concepts of Jesus.

“The verses ‘But I say unto you, that ye resist not evil; but whosoever shall smite thee on thy right cheek, turn to him the other also. And if any man takes away thy coat let him have thy cloak too’ delighted me beyond measure… My young mind tried to unify the teaching of the Gita, the Light of Asia and the Sermon of the Mount.”

The Story of my experiments with Truth

Almost in the same period, he read Carlyle’s biography of Muhammad. He understood the life and message of the prophet. He was attracted by the purity that Quran advocated in personal and social life. Also, the importance placed on fasting, and almsgiving impressed him. In his ashram, Gandhi encouraged children from other religions to fast with Muslim families.

Since he read ‘The Light of Asia’ by Edwin Arnold, Gandhi was impressed with Buddhist doctrine. He adopted Buddha’s pacifism and advocacy for meditation. He was also inspired by books like Tolstoy’s ‘The Kingdom of God is Within You‘ and John Ruskin’s ‘Unto this last‘.

From then he began assimilating the teachings of different religions in his inimitable way.

“To me, God is Truth and Love. God is Ethics and Morality. God is Fearlessness. God is the essence of life and light…. He is the purest essence… He is all things to all men. He is in us and yet above and beyond us.”

Gandhi’s idea of religion was not confined to shrines, books, rituals and other outer forms. Though he followed and often quoted the ideals in Gita, Bible and Quran, he was not bound by them. He also did not sink to the belief that the teachings of any single faith are better than others.

Drawing from different religions, Gandhi shaped a spiritual view of his own. Though he encouraged his followers to stick with their faith, he effectively restructured their spiritual outlook.

Gandhi emphasized that Truth is God. The word ‘Truth‘ has profound connotations. It is the all-pervading essence of the universe. He argued that an atheist can refute the existence of God but not Truth.

Throughout his life, Gandhi yearned to realize the ultimate truth. He thought about it every moment and embarked on a scientific quest to attain it.

Hence the name of his autobiography ‘The Story of My Experiments with Truth’ is apt.

“There is no religion higher than truth and righteousness.”

Gandhi believed that the way to go about on a spiritual life is by seeking truth. To achieve this one has to constantly evolve and refine oneself. A seeker should have an unquenchable thirst for the truth, combined with the purity of thought and action.

He advocated that a violent mind can never reach the ultimate truth. To even get a glimpse of it, one should be in complete peace with himself and the world. The perfect harmony born from Ahimsa — a pure state of non-violence — is the prerequisite of spiritual life.

All of Gandhi’s actions, whether political or personal, were in search of Truth. He devised a non-violent form of protest called Sathyagraha to resist evil. He demonstrated its effectiveness against the mighty British empire. This made him a saint among politicians.

A lifelong quest for truth, empowered with non-violence and righteousness will purify a person. It will also positively affect society. Gandhi proved this with his own life. He was able to influence the likes of Martin Luther King Jr, Albert Einstein, Nelson Mandela and the human race as a whole.

Gandhian religion was thus two-edged as it aimed to reform the society as well as the individual. Nevertheless, he did not want his teachings to develop into a rigid doctrine. However, he encouraged moral uprightness necessary for reaching the goal.

If it helps to create a peaceful society that lives in perfect harmony; if it cleanses us and aids our spiritual development; if it can create a new world of mutual respect and love; can’t we embrace Gandhi’s doctrine?

Thank you for reading. I would enjoy hearing from you. Please post your opinions in the comment box below.