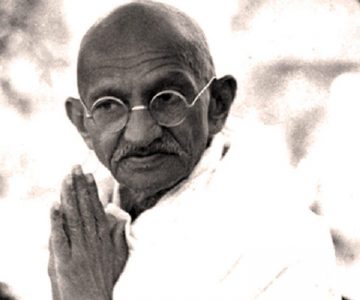 I deny being a visionary. I do not accept the claim of saintliness. I am of the earth, earthy . . . I am prone to as many weaknesses as you are. But I have seen the world. I have lived in the world with my eyes open”

Through the last year, we were on a quest to discover Gandhi. It was in observance of his 150th birth year that I ventured on a blog series. The intention was to shine light into the legacy of a largely forgotten and generally misunderstood leader.

Yet towards the end of the 20 part series, I cannot claim that I have succeeded in the venture. It may be due to the complexity of the leader’s multidimensional personality or the extent of his ventures and struggles. But if the series helped to change even the perspective of one person, I consider it a success.

I have endeavored to give a clear-eyed view of Gandhi. The aim was to depict his proverbial many-sidedness, without deifying the figure. It was an attempt to portray Gandhi as he was: a social, religious, economic and political theorist. But his saga is surely more than these definitions can confine.

” [Gandhi] never set out to develop a fixed and final doctrine, but emphasized that his practice of ahimsa or non-violence was always experimental, that his political struggle like his personal life was part of a continuing quest for Truth as manifested existentially, a quest that could never end because the human understanding was incapable of comprehending the Absolute”

Even as I took up the series, it was quite clear that I cannot wholly capture the person that is Gandhi. I have iterated Gandhi’s efforts as a statesman, educationist, revolutionary, socialist, prophet and saint. But the great body of his illustrious life remains unsaid; partly because some of them were mentioned in a previous blog series and partly because of its sheer volume.

Nevertheless, I believe the series gave some glimpses into his strenuous life. I hope the blogs were little dots, when connected, reveals the picture of a spiritual pilgrim and a secular saint.
At the very least, I expect they give a justification for terming him Mahatma or The Great Soul; a sobriquet that he never accepted.

A life of struggle

“Generations to come, it may well be, will scarce believe that such a man as this one ever in flesh and blood walked upon this Earth.”

Throughout his eventful life, Gandhi stood for many causes: political, social and spiritual. In each venture, he succeeded in formulating unique theories based on Truth and Non-violence. He is one of those few leaders who demonstrated the effectiveness of his methods with his own life.

The primary aim of Gandhi was to uplift the society from its evils. It was even above achieving freedom from tyrannical colonial rule. Hence, he dedicated his life to redeem the nation steeped in poverty, untouchability and illiteracy. He struggled hard against these issues and tried to teach the recalcitrant society his theories of self-reliance, minimalism, non-violence and truth.

Yet, Gandhi’s words were mostly unheeded. He was ostracized by the upper castes and his ideologies were many times sidelined during the freedom movement. Furthermore, the communal riots that broke out following the cataclysmic partition of India were against everything Gandhi stood for. Though by the sheer force of his personality, he was able to mitigate the blood bath, Gandhi was very exasperated.

Gandhi’s life can be read as a moral saga in its own right; sometimes tragic in its deepest sense. The struggles that he led, went on to better millions of lives. Yet he had to witness the peace — that he strenuously built through years — shattered into pieces. It deeply hurt him to see the very people who intently listened to his melodious songs about love turning to barbarians, raping and killing companions because they believed in a different God. Gandhi was exasperated and felt he failed miserably even after half a century of self-sacrifice.

“My life is my message”

Nevertheless, in retrospect of the history of the freedom struggle of India, only this frail old man stands out; clad in a simple loincloth. If not for his indomitable spirit and high ideals, India will not be where it is now. His lifelong efforts for social justice, self-reliance, and complete freedom resulted in the upliftment of the whole of the nation. If his notions were followed, a new world would have evolved for sure.

But it is not late yet, the concepts of peace and love never lose their value. We have the power to resurrect Gandhian ideologies and use it as an antidote to today’s world tormented by vile, biased and power-mongering leaders.

A wise, transparent and spiritually strong leader like Gandhi rarely arises, but the inspiration is still there to be imbibed.

Thank you for reading the series. I would love to hear your opinion. Please post them in the comment box below.

8 thoughts on “Behold the Man!”