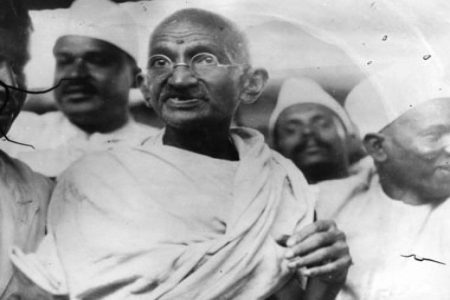 Fear is a thing which I dislike. Why should one man be afraid of another man? Man should stand in fear of God alone, and then he can shed all other fears.

How Gandhian philosophy demands bravery of the follower was discussed in the last blog. It would suffice here to say that a Satyagrahi is not to have a shred of fear in his being. Only then can he nonviolently face every harm inflicted on him by the evildoer.

Gandhi may be the bravest man that has ever lived. How else can a frail old man in loincloth stand against the mighty British empire? No amount of threats, physical force and humiliation could crush his strong will.

Throughout his life, Gandhi demonstrated his indomitable spirit through his actions and words.

In his long life a social reformer, Gandhi had to face many forms of oppression, mostly from very powerful individuals or authorities. But all of them ultimately buckled under Gandhi’s strong power of will. There are many instances in his life which proved his bravery.

While leading the struggle for the right of the oppressed in South Africa he was stoned and beaten by a mob of racists. He suffered broken ribs and barely survived. Moreover, he was imprisoned four times and manhandled by the police. But all this cruelty could not stop him from achieving his goal.

While leading the freedom struggle in India, he was jailed on six occasions, spending a total of almost 7 years behind bars. But Gandhi never resisted arrest nor showed any fear of being locked up and possibly tortured by the authorities. He also faced rebuke and death threats from the upper caste in the society for his efforts for social reform.

The greatest display of his fearlessness came at the time of partition of India. During the riots that ensued following the division of India, he traveled solo to the riot-affected villages in Noakhali spreading the message of brotherhood. Even the police and armed forces feared the area as was the epicenter of violence.

But Gandhi was a fearless being with an unstoppable force of will.

“My creed of nonviolence is an extremely active force. It has no room for cowardice or even weakness. There is hope for a violent man to be some day non-violent, but there is none for a coward.”

Pacifism is considered by many as a form of cowardice. They maintain that the fear of fighting gives rise to non-violence. For them, animalistic urges like anger and violence are signs of bravery. But Gandhi held a different view.

The disposition of the critics stems from their violent temperament. They miss the point that it is easy to succumb to the instincts and difficult to choose the high road. Those who understand the level of self-mastery needed for a person to remain non-violent cannot help but respect the ideology of Satyagraha.

Gandhi understood the deep-rooted fear in the masses and worked to ameliorate it.

Identifying his own fear

“Fear is a disease worse than malaria or kalaazar; these diseases kill the body, fear kills the soul.”

In his autobiography, Gandhi narrates how introverted and shy he was as a child and teenager. He was afraid of ghosts and evil spirits as a boy. Even as an adolescent he could not bear to talk to strangers. There was one incident on his farewell party from India when he was so overcome with stage fright that, without uttering a single word as thanks, he stumbled back to his chair.

Later Gandhi thought long and hard about his incapability and became aware of the deeply hidden fears in his psyche. He addressed his fears and blotted them out completely. In the process, he realized how crippling the instinct can be.

Gandhi understood fear is created and manipulated by the oppressor to control the poor. He made it his mission in life to equip people to face their fears. He demanded bravery from his followers and scientifically explained the process of fear.

“There would be no one to frighten you if you refuse to be afraid.”

Like every urge, Gandhi argued, fear also needs compliance of its victim. Those who manipulate and oppress people with the emotion rely on the belief that the oppressed will not question what they fear. But once they start facing it and start enquiring, its powerful grip loosens.

Contrary to the common belief, Gandhi concluded that violence is an expression of hidden fear. People resort to fighting when they become afraid. In its dire form, people even lose the capacity to think and act properly. So he advocated the total purging of fear from the person’s heart.

“My nonviolence does admit of people, who cannot or will not be non-violent, holding and making effective use of arms. Let me repeat for the thousandth time that nonviolence is of the strongest, not of the weak.”

For Gandhi, his spiritual and social lives were one and the same. Looking into the human nature, he understood that to progress in both, one has to transcend fear. He held that only a truly spiritual being can do so. He pointed his disciples in this direction again and again.

“Perfect fearlessness can be attained only by him who has realized the Supreme, as it implies the height of freedom from delusions. But one can always progress towards this goal by determined and constant endeavour and by increasing confidence in oneself….”

Thus Gandhian philosophy redefined bravery as the unscathed love even in face of threatening situations. It ultimately led the ardent follower towards spiritual realization. It is to our generation filled with fears hitherto unknown to the human race, Gandhi whispers the mantra of fearlessness.

Can we slay the dragon of fear using the sword of love and shield of non-violence and enter into the spiritual realm as he envisioned?

Thank you for reading. Please let me know your thoughts in the comment box below.