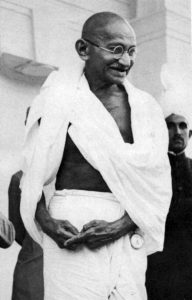 Strength does not come from physical capacity. It comes from an indomitable will.

In the last blog, we saw the moral, social, and political impacts of Satyagraha. The non-violent protest appeals to the goodness inside the oppressor and encourages him to see his mistake. The struggle also bids public sympathy with its pacifist approach, moral uprightness, and iron will to endure suffering.

Nevertheless, not everyone can wield this powerful weapon. Some qualities are indispensable for making satyagraha effective. Gandhi explicitly mentioned that to tap into the infinite power of Satyagraha a person has to abide by these values.

Attributes of a Satyagrahi

The necessary traits of a Satyagrahi are

1 He should be law-abiding

Only someone who respects the rule of law has the moral right to criticize an unjust law. Gandhi believed that to point out the flaw in a system, satyagrahi has to believe in the system first. A criminal mind cannot question the prevalent evil rule.

2. He should be a pacifist

A satyagrahi should not brew resentment towards the tyrant. He should distance himself from all forms of violence. Physical force, profane language, hatred, and destruction of public property are not allowed.

3. He should be brave

Satyagraha demands heroic courage. Someone with even a tinge of fear in his being cannot fight against evil. He should be ready to endure all forms of torture and even give up his life if that is what it takes in the path of non-violence. Hence he should purge his soul of all fears before attempting the protest.

4. He has to undergo self-scrutiny

Gandhi insisted that before satyagraha, the protestor should spend a couple of days in silent meditation. He believed that it would help the satyagrahi find the inner strength to go through the demanding process.

5. He should be motivated by love

Above all, satyagraha should be the expression of satyagrahi’s love and sympathy towards the tyrant. If hatred and resentment are his motivations, he will fail in his attempt to convert the wrongdoer.

Power of a Pure Soul

Non-violence is the greatest force at the disposal of mankind. It is mightier than the mightiest weapon of destruction devised by the ingenuity of man.

According to Gandhi, a Satyagrahi achieves the right insight of the situation, however evil it may be. His non-violent mind gives him clarity of the problem. Though he empathizes with the oppressed, he never brews contempt for the oppressor.

The unemotional approach and undeterred focus help him to influence the tyrant. His nonjudgemental approach allows the evildoer to see his mistake.

Satyagraha can rid society of all evils, political, economic and moral.

Gandhi was an optimist. He believed that people are inherently good. But sometimes they act out of ignorance, fleeting emotions and prejudices. This can sometimes cause misery to others. If someone can take the pain to make him understand his mistake, he will indeed repent.

His philosophy aimed at empathetically approaching the person responsible and appealing to the goodness in him. It takes a pure soul with a great moral force. So Gandhian philosophy demanded the oppressed be pure first, before protesting against evil.

The system thus aims at the spiritual growth of both the oppressor and the oppressed. What a great opportunity it is to uplift humanity into a new age of love if everyone abides by it.

In a world ravaged with violence, can we heed the philosophy of Gandhi and create a new age of love like the one in his dreams?

8 thoughts on “Qualities of a Satygrahi”