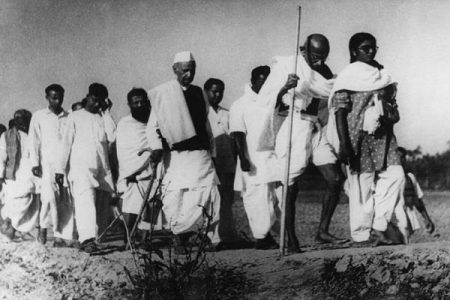 Satyagraha may be the most potent legacy left behind by the iconic leader M K Gandhi. The awe created by the far-reaching effects of the novel and non-violent protest is legendary. But it is quite unfortunate that many have not conceived the idea clearly.

Satyagraha is a socio-political struggle based on moral coercion. Fuelled with love, the action persuades the wrongdoer to give up his unjust behavior. Gandhi himself demonstrated the converting power of the movement.

Many who criticize the historic leader as an idealist and impractical, have denounced the movement as ineffective. They mistake it as a naïve method of starving oneself to no end. But a deeper understanding of Gandhian Sathyagraha will prove that it has an influence not only on the opponent but the very fabric of the social consciousness.

Satyagraha can be defined as a disciplined protest against oppression. It is a moral act of persuading the tyrant to do justice. A brave Satyagrahi – someone who uses the method – refrains from all forms of violence and refuses to cooperate with evil. He stoically faces the brutality of the oppressors and fights until the opponent conceives his own mistake.

To prove the concern for the tyrant, a Satyagrahi readily takes up self-suffering. It usually involves fasting for days on end posing danger even to the life of the protestor. Nevertheless, he never deters from his path.

Satyagraha can be termed as an unflinching statement of a brave fighter. He proclaims that ‘I am ready to sacrifice my life, if that is what it takes, to deliver you from evil’. He neither uses violence nor kneels before it.

What is the philosophy behind the protest?

Gandhi believed that truth is the greatest force in the universe. A moral person can harness it by using non-violent methods. But he has to purge himself of all evil to do so. A pure mind free of revenge, hatred and anger can influence the most devilish person.

In Gandhi’s words, by “…pitting one’s whole soul against the will of the tyrant…” a Satyagrahi proves he can fight hatred with love. The ultimate aim of Satyagraha is not to defeat the oppressor but to convert him. Hence no one loses and there is no resentment.

“Minds are conquered not by arms, but by the greatness of soul”

Gandhi maintained that love is a magic ointment that can heal the heart of even a savage. Hence he based his protest on the philosophy of love and truth.

How is it organized?

There are usually four steps involved in a Satyagraha Campaign

Gandhi made sure that he was fighting for the right cause before he started Satyagraha. He collected the information from all possible sources. Then he arrived at conclusions regarding the rightful needs of the protestors.

After understanding the truth in the situation, Gandhi held talks with the oppressor. He tried to create a situation for integrative conflict resolution. If it fails, he warned the tyrant that he is going to launch a movement to open his eyes towards the truth.

Gandhi informed the world about the reasons behind the Satyagraha beforehand. He wanted to compel the social consciousness to support the oppressed.

Gandhi educated the protestors on the sacred laws of the movement and the moral requirements of a Satyagrahi. He then handpicked some from the group to lead the mass protest alongside himself. A satyagraha campaign is thus launched.

How did Satyagraha succeed?

Satyagraha primarily focused on converting the wrongdoer by appealing to the goodness in him. Gandhi believed that no one is so evil as to disregard the moral plea of the suffering masses.

Secondly, the protestors refused to cooperate with the evildoer. They did this in a nonviolent and civil way without any fear of the guns and prisons of the oppressor.

“I believe that no government can exist for a single moment without the co-operation of the people, willing or forced, and if people suddenly withdraw their co-operation in every detail, the government will come to a standstill.”

More often than not, the righteous movement bid public sympathy. The charm of the movement is that it made the voice of the downtrodden heard without bloodshed. This social appeal put a great deal of pressure on the oppressor. He is hence forced to negotiate with the protestors and concede to their needs.

Reshaping the world with love

Hatred strives in the belief that it begets hatred. But the Gandhian struggle fought hatred with love and succeded. Thus the greatest achievement of Satyagraha is that it reshaped the social consciousness.

Once the world realizes that love is the most powerful weapon, every struggle assumes a new form. Every protest slips from the grasp of rage and hatred and gets fuelled by love. The empathetic approach to the oppressor is sure to convert him

Gandhi dreamt of a world where the oppressor and the oppressed can sit around the table of brotherhood. He was optimistic that such a day would come through his non-violent methods.

Can’t we strive to make his dream come true?

23 thoughts on “Gandhian legacy of Satyagraha”