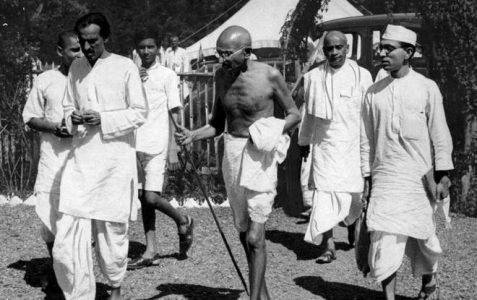 Dealing with evil may be the greatest vexation of a moral person. When faced with negativity, remaining calm and standing a firm ground is demanding, even draining. Many succumb to frustration and resists evil with violence.

However, anger and violence are just other forms of evil. Thus unknowingly, they are bowing to the same evil they are trying to resist.

If so, what is the best weapon against wickedness? Gandhi thought long and hard about this problem and forged one: Non-cooperation.

To understand the concept of non-cooperation, we should first know how evil operates. Evil can be an oppressive government, violent ideology, biased organization, or people led by hatred, greed, and so on.

At first, evil appears innocuous, and many get enchanted by it. Fence-sitters and uninterested ones are enticed with bribes. Those who resist are browbeaten or tortured. Thus evil gets enforced.

“Non-cooperation is a measure of discipline and sacrifice, and it demands respect for the opposite views.”

Non-cooperation is the total abstinence from surrendering to darkness. It does not respond to negativity with violence but stays away from its influence. In essence, the philosophy of non-violence sees evil as a disease. Hence it neither hates nor collaborates with those who are affected by it.

However, non-cooperation is not an easy task. Evil will try everything in its power to entice one; if that does not work, it will subdue him. A person has to have the discretion to spot out evil, be morally strong to resist temptation and be fearless in the face of torture to practice non-cooperation.

What made Gandhi come up with the idea?

One of the cruelest acts of the 20th century took place in Amritsar, India, on 13th April 1919. The high-walled garden of Jallianwallah Bagh witnessed the massacre of unarmed protestors under the order of Acting Brigadier-General Reginald Dyer. In the unprovoked shoot-out, almost 400 were killed, including 41 children, and over 1000 were injured.

The evil act shocked the world. Indians rebelled against the atrocious act of the British government. Though the incident touched Gandhi deeply, he summoned India to remain calm and refrain from violence.

After long reflection, Gandhi came up with the idea of the Non-cooperation movement. In December 1920, the Indian National Congress launched it. Heeding the call of non-cooperation, Indians resigned from government positions, boycotted government institutions, and gave up foreign goods. The country virtually came to a standstill.

The movement made an impact of epic proportions and shook the great British empire. The colonizers witnessed something unique and were defenseless against it. The struggle took India to the brink of independence.

Gandhi’s idea of non-cooperation was not just a political weapon. Like everything with him, the movement was the expression of his spirituality which is deep-rooted in truth and non-violence.

Nevertheless, Gandhi never denied the courage and mental strength it took to stand against the forces of evil. His mettle was tested in many crucibles of torture and it was irrefutable that he was ready to die for his ideals. He constantly reminded his followers of the sacrifice needed to make the idea applicable.

Following the Chauri Chaura police station burning incident on 5th February 1922, Gandhi realized that his followers were not morally equipped to implement his concept. He immediately called for stopping the struggle. But the movement had gained great momentum nationwide and it was difficult to stop it just like that. His decision shocked even his close followers. Romain Rolland wrote:

“It was dangerous to assemble all the forces of a nation and to hold the nation panting before a prescribed movement, to lift one’s arm to give the final command, then at the last moment, let one’s arm drop and thrice call a halt just as the formidable machinery has been set in motion. One risks ruining the brakes and paralyzing the impetus.”

But Gandhi was sure in his decisions. He went into a fast and vowed not to eat until even the last sound of protest was muted.

Though the movement met an untimely end, Gandhi realized its social, political, and spiritual impact. He never gave up the idea and preached it as the best weapon against evil.

In the end, that was exactly what happened.

A moral person feels suffocated in today’s world polluted with negative and vile ideas. We find it difficult to align with evil and many a time, react violently. Only later do we realize that these emotional outbursts did more harm than good. It is in this context that we find Gandhi’s ideals effective.

If we fearlessly stand against evil without surrender, we can cut firelines and stop its spreading. All we have to do is undo the last thread of hatred within us and vow to never kneel before negativity.

Think about the freedom that comes with non-cooperation. Some simple actions can evil-proof us and also curb its spreading in society. Ignore the hateful posts on FaceBook, isolate violent political ideas, and never let greed drown you.

Let us eradicate evil with non-cooperation as Gandhi envisioned.

15 thoughts on “Non-Cooperation with Evil”