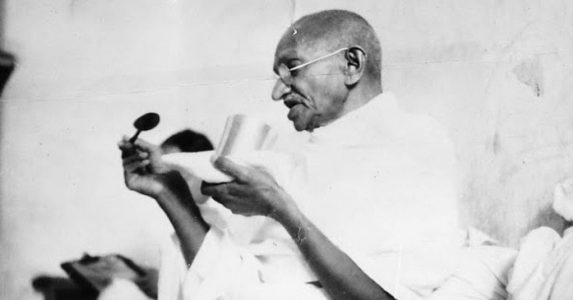 Many mistake Gandhi as a one-dimensional political leader whose sole aim was Indian independence. A detailed study of his life reveals that their estimation cannot be more far from the truth. Gandhi was much more than just a rebel leader.

Throughout his life, Gandhi learned different ideologies and experimented with them. The aim of all his efforts was to find the ultimate truth. Hence the name of his autobiography ‘The Story of My Experiments with Truth‘ is fitting.

Gandhi only believed in something after thorough vetting. He was ready to endure the pain which takes to try and test any ideology including his own. Thus he was able to draw from his own experience rather than parroting something from a book.

Born to a vegetarian family, Gandhi became a strict vegetarian. But he was curious about what food does to a person even as a child. From one of his friends, he heard that meat makes a person strong. Gandhi went on to try it against the religious tradition and understood that all the hype around meat was meaningless.

While studying in London, he came across Henry Salt’s book A plea for vegetarianism which captured his attention. Even then he experimented with diets containing milk and eggs. Later he tried an uncooked diet and even ventured to survive on nuts and fruits alone for some time. He found out that:

Food should be taken as a matter of duty even as a medicine to sustain the body, never for the satisfaction of the palate.  Thus, pleasurable feeling comes from satisfaction of real hunger. Therefore, we can say that relish is dependent upon hunger not outside it. Because of our wrong habits and artificial way of living, very few people know what their system requires.

Gandhi continued his research in food practices together with his friend Herman Kallenbach while in South Africa. He fasted for long periods to cleanse his system and to know his limits. Maybe this prepared him for Satyagraha, a unique protest which demands long abstinence from eating and worldly pleasures.

Through long years of research and experimentation, Gandhi acquired a vast knowledge of nutrition. He advocated for vegetarianism and the right diet. He taught his followers on the importance of healthy food and how to take it mindfully. He writes:

Mastication is an important step in the process of digestion, especially that of starch. Digestion of starch begins on its coming into contact with saliva in the mouth. Mastication ensures foods should be eaten in relatively dry form, which results in a greater flow of saliva and also necessitates their thorough mastication.

The quote demonstrates Gandhi’s knowledge and meticulous understanding. In his book The Moral Basis of Vegetarianism and another named Key to Health he analyses each type of food and explains in detail the nutrition contained and the purpose it serves. He used to share such knowledge as articles in his journal Young India and Harijan which were later compiled as a book Diet and Diet Reform.

This thorough understanding made him an authority in the area. Eventually, he developed his own philosophy of diet based on his natural moral rectitude. Gandhi’s idea can be summarized in the following words

One should eat not in order to please the palate but just to keep the body going. When each organ of sense sub serves the body and through the body the soul, its special relish disappears, and then alone does it begin to function in the way nature intended it to do.

Drawing from vast research, experimentation and observation, Gandhi concluded that a vegetarian diet is the best. He gave no importance to taste but was adamant about taking in healthy and clean food with lots of green. He also avoided sugar, processed food,  vanaspati ghee, some pulses and was very skeptical about salt.

Any number of experiments is too small and no sacrifice is too great for attaining this symphony with nature. But unfortunately the current is nowadays flowing strongly in the opposite direction. We are not ashamed to sacrifice a multitude of other lives in decorating the perishable body and trying to prolong its existence for a few fleeting moments with the result that we kill ourselves, we give rise to a hundred new ones; in trying to enjoy the pleasures of sense, we lose in the end even our capacity for enjoyment. All this is passing before our very eyes, but there are none so blind as those who will not see.

This said Gandhi believed everyone had the right and duty to experiment and find the right diet for herself. In no way he supported the radical Hindus, who kill innocent people in the name of cow vigilantism.

…. to sum up all religion in terms of diet, as is often done in India, is as wrong as it is to disregard all restraint in regard to diet and to give full reins to one’s appetite.

Nevertheless, Gandhi was forced by his doctors to take goat’s milk. He had stopped drinking milk since he heard of the cruelty involved in the milking process. But the doctors insisted on him drinking it when he encountered dysentery in 1917 and after his health depleted alarmingly following the Kheda Satyagraha of 1918.

He accepted the nutritional value of dairy and tried throughout his life to replace it with a vegan substitute. He was remorseful that he had to take milk against his ideology. He compensated this by keeping goats and making sure they were in no way tortured to extract milk.

He respected and cared for the animals so much so that he proudly took Nirmala, his goat, when he went to London for the Round Table Conference of 1931.

A path towards Ultimate Truth

As a numinous person, everything that Gandhi did was focused on spiritual growth. His experiments with diet were no exception.

Gandhi believed that a person cannot progress spiritually and attain the omnipresent truth unless she is mindful of what she takes in. Spirituality and veganism were inseparable from his perspective.

I do feel that spiritual progress does demand at some stage that we should cease to kill our fellow creatures for the satisfaction of our bodily wants. The beautiful lines of Goldsmith occurs to me as I tell you of my vegetarian fad:

No flocks that range the valley free
To slaughter I condemn;
Taught by the Power that pities me
I learn to pity them

Is there a better plea for vegetarianism?

Thank you for reading. I would love to hear from you. Please post your valuable opinions in the comment box below.

8 thoughts on “Gandhi’s Plea for Vegetarianism”