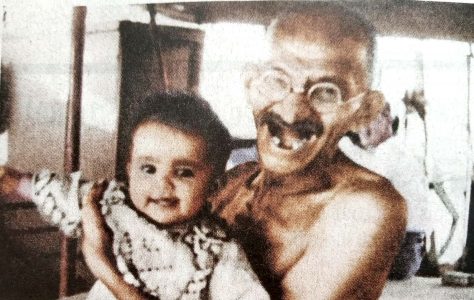 In the year 1931, Gandhi went to Europe to attend the round table conference and discuss the constitutional reforms in India. While in Britain, he was invited by the King to the Buckingham Palace.

Gandhi visited his majesty in his customary simple attire and had a pleasant discussion. Yet the British media was quite disgusted by the bravado of the ‘half-naked fakir’.

During the press conference, a reporter pointed out the inappropriateness of visiting his majesty in a loincloth. Gandhi smiled and replied that it did not come up as an issue as “The king had enough for both of us”.

During his time, many regarded Gandhi to be a strict disciplinarian and a reserved philosopher. But once they met him in person, they were baffled by the charm and playfulness of the leader. They were surprised by his humble character and quick wit.

People close to Gandhi attest to Gandhian mirth. His comments were ‘sometimes sly but quite without malice [and] sometimes whimsical’, notes Sarojini Naidu, poet and a close associate of Gandhi.

Unfortunately, not many accounts of his amusing, even infectious, sense of humor are available. Hence his lighter side of the multifaceted life lies invisible in history.

“If I had no sense of humor, I would long ago have committed suicide.”

Gandhi’s conversations with friends and followers were not always philosophical or political. Mostly they had a convivial discussion and everyone used to have a great laugh.

Gandhi found funny nicknames for his close friends. In his letters, he addressed them with terms like My dear peacemaker, Dear bulbul, Guardian of my soul, My dear fly, Dear ammajaan. As for Abha and Manu, his constant companions, he lovingly referred to them as ‘my walking sticks‘ as they always supported him.

His wife Kastoorba was not spared either. She used to fast once a week. One boiled potato and a little salt were all she had during those days. Her grandchildren used to gather around to get a bit of these tasty meals against Gandhi’s instructions. When Kastoorba sneaked them bits, Gandhi would complain that she would ‘spoil her grandchildren with potatoes!’

Banter with the Reporters

“I believe in equality for everyone; except reporters and photographers.”

Gandhi was followed by the press everywhere. As with reporters of all ages, they always had daunting, even mocking queries for Gandhi. Many of his answers, used to ‘leave his questioner feeling baffled if not exasperated’ records Mrs. Polak in ‘Gandhi the Man’.

An arrogant reporter once asked Gandhi “Why do you always choose to travel by third class on a train?”

Gandhi replied with a twinkle in his eyes “Simply, because there is no fourth class as yet.”

Nevertheless, Gandhi made sure his quips never hurt anyone personally. It was more of an expression of his whimsical attitude than making fun of others.

Despite his busy schedule Gandhi used to spend a considerable amount of time with the children in his ashram. He told them stories and enjoyed playing with them.

Dr. E. Stanley Jones, the author of ‘Mahatma Gandhi’, iterates an incident during his stay with Gandhi in Sabarmati ashram. At the time, everyone in the ashram was apprehensive that their leader will get arrested and tortured yet again for his recent campaigns. Gandhi wanted to ease the tension of his followers

During his evening stroll, the American theologian records, Gandhi played a game with the children to see who could run the fastest and touch the jail gate first. “And yet those of us who knew how events were shaping knew that he would soon be … (touching the jail gate) as a prisoner. He made a joke of it!’‘

Dr. Jones was astonished at how Gandhi eased the tension of the situation with such acts. He also writes how children would ‘crawl all over him and hang about his neck while he was talking‘ at the evening prayers. ‘It didn’t seem to embarrass him the slightest’ he notes.

Sardar Vallabhai Patel, a fellow revolutionary and a great admirer of Gandhi, had a great rapport with the old man. It is said that Gandhi revered Gokhale, promoted Nehru; but with Patel, he leaned on and laughed.

Mostly, Patel with his quick wit bested Gandhi and had him in a fit of laughter.

In 1938 a Congress Convention was held at Gujarat. Sardar Patel was the main organizer of the event. Many prominent leaders were to attend the meeting presided by Subhash Chandra Bose. Gandhi was keen that every delegate should get cow milk. When he conveyed it to Vallabhbhai, he replied promptly, “Don’t worry, it will be arranged. We have a lot many buffalos in Kheda district and will convert them into cows by painting them white!”

The Sardar also once complained that “Bapu has only very few teeth left, nevertheless he keeps on brushing them.” Gandhi undoubtedly brought out the lighter side of the iron man of India.

Gandhi’s jest is a testimony for his unassuming character amidst the cloud of revere surrounding him. He had the humbleness to chuckle with those who made fun of him. Gandhi did not hesitate to joke about himself if that made for a good laugh.

According to an article by Claire Sheridan, an American lady once asked the old man “When you will be visiting America? People are eager to see you”.

“Yeah, I have heard about that”, Gandhi quipped. “They have kept the zoo and cage ready so that everyone can see this strange creature”.

Finally, he used his humor to bring to light the uncivilized treatment of India by the colonizers. When a reporter asked Gandhi what he thought of Western civilization. Gandhi replied, “I think it would be a good idea!”.

Thank you for reading. I would love to hear your opinions. Please post them in the comment box below.