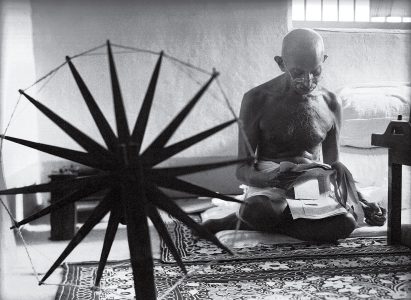 Simplicity might be the most striking thing that set Gandhi apart from other world leaders. He lived, talked, and acted without pretensions. When public figures of the time sported expensive suits to look sharp, Gandhi was clad in a single piece of white dhoti – long cloth worn by men in India – and a wooden stick.

As a minimalist, Gandhi owned very few things. His worldly possessions consisted of a spectacle, a pair of sandals, an eating bowl, a watch, and a few simple clothes. The only luxury was a blanket to cover his bare chest during cold. According to historians, Gandhi owned no more than 10- 20 things.

Born to a wealthy aristocratic family and educated at University College of London as a lawyer, Gandhi was no stranger to an opulent lifestyle. He speaks, in his autobiography, of how he tried to embrace the European lifestyle while in England by wearing a bow tie, paying for English and French lessons, and even learning ballroom dancing. But he was disillusioned of these make-overs fast. Soon, attracted to the idea of minimalism, a trait of the ancient Indian practice of Sanyasa, he renounced everything.

Wanting to identify himself with the poorest of the poor in the society, he gave up his European clothes when he returned to India in 1915 and adopted traditional Indian dress. At the time, India was trampled into poverty under the hard-heels of British imperialism. He soon realized that the poor in India never got to wear decent clothes, forget traditional garments. He thus adopted as simple an appearance as possible.

After meeting the King of England in Buckingham palace, a journalist scornfully asked Gandhi, “Mr. Gandhi, did you feel under-dressed when you met the King?”

“There was no problem,” Gandhi replied with a serene smile. ”His Majesty more than made up for both of us.”

He learned to weave his clothes using a charka (handloom) and encouraged others to do so. This inspired indigenous weavers in India, whose looms were broken and thumbs cut off by the colonialists. The charka later went on to become a symbol of the Indian independence struggle.

Gandhian minimalism was beyond appearance and possessions. It upheld self-relience. Inspired by the Tolstoy model villages, Gandhi created self-sustaining ashrams. All basic needs, from food to clothing to education, were available there. In the ashram, everyone, including Gandhi, engaged in farming, weaving, and cleaning.

Gandhi insisted on doing the chores like manually washing his own clothes. According to him, to achieve complete freedom, a person had to be self-sufficient in all respects. To this end, he used to cut his own hair since he became a barrister in South Africa. Later, when he returned to India, mahatma gave training to ashram followers to make all necessary items like candles, soaps, and so on.

Gandhi maintained that non-attachment to material things is indispensable to live a simple and satisfying life. Nothing could bribe him into doing something that he did not have faith in.

“Man falls from the pursuit of the ideal of plain living and high thinking the moment he wants to multiply his daily wants. Man’s happiness really lies in contentment.”

He used to give away whatever precious gifts his distinguished guests presented him. While in South Africa, between 1896-1902, Gandhi received many priceless gifts; including gold and diamond jewelry. Kasturba, his wife and devotee, wanted to keep it for their children. But Mahatma created a trust and donated it to the struggle against racism there.

As a minimalist, Gandhi refrained from overindulging in anything. Even when the Indian freedom struggle was at its peak, he religiously followed his routine. He even found time for playing with children and a day-of-silence every week.

“Simplicity is the essence of universality.”

Gandhi advocated judicious use of resources. It is famous how he used pencils to reply to the letters and wrote with them as long as he could hold them. He used to say that wasting a pencil was a disrespect to the hard toil of the one who made it.

He held a similar view on food. Gandhi taught his followers to eat plain food mindfully and moderately without wasting a single grain. Often observing fasts to cleanse himself, he sanctified the idea of not eating.

The Secret for a Happy Life

For an avaricious society madly in pursuit of indulgence, Gandhian minimalism is a call from behind. Gandhi urges us to slow down and enjoy a simple and satisfying life.

“Happiness, the goal to which we all are striving is reached by endeavoring to make the lives of others happy, and if by renouncing the luxuries of life we can lighten the burdens of others…. surely the simplification of our wants is a thing greatly to be desired!”

Gandhi’s antidote for those of us tired of chasing luxuries and living a life of unhappiness is to adopt a simple and minimalist life. Can we find the will to turn back from our insatiable greediness and follow his lifestyle?

Thank you for reading. Please post your comments in the box below.

24 thoughts on “The Minimalist Gandhi”