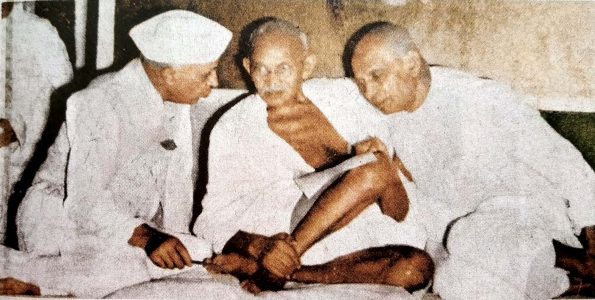 Gandhi’s nationalism is unique. More than just a political ideology it favored a moral standard. The high values formed the spirit of Mahatma’s nation.

Gandhi arrived at his notion of a moral state after intense research. He directed his efforts to know about different polities. At the same time, he was anchored on the indigenous culture of India. He took the right policies from the west and integrated it with the inherently spiritual nature of his country.

In the present age, when ultra-nationalism is gaining prominence, it is good to know what Gandhian vision of nationalism and politics is.

‘The state represents violence in a concentrated and organized form. The individual has a soul but the state is a soul-less machine, it can never be weaned from violence to which it owes its very existence.’

Gandhi was aware of the atrocities caused by ultra-nationalistic ideologies. He was always against the idea of the power of the state being concentrated among a few individuals.

Though all the states and nationalists primarily claimed to be moral institutions operating for the good of the people as a whole, Gandhi understood its evil. He foresaw that the state will easily turn into an arena of conflict between organized interests. He feared the biased leaders might manipulate and control these institutions with their gimmicks.

To prevent that he envisioned a nation with self-ruling villages that are brought together by moral high standards. This, he believed, will refute the nationalist fanaticism.

The problem of fanatic patriotism

“…politics divorced from it (morality) is like a corpse fit only for burning.”

The Indian freedom struggle demanded utmost sacrifice from the 330 million Indians. It could only be achieved by igniting a strong sense of nationalism. But Gandhi did not resort to that.

Gandhi understood the problems posed by such an extremist society after independence. Even though it would help him fight the iron fists of the mighty British Empire, he saw that ultimately the fanatic ideals will destroy the soul of India. He could never let that happen.

He held that to achieve complete independence (Purna Swaraj) India had to be free from ultra-nationalism and embrace high moral standards. His contemporaries observed in awe how the frail old man slowly empowered the masses through his teachings and moral life.

‘The Ramraj of my dream ensures the rights alike of prince and pauper.’

Gandhi’s envisioned the nation to evolve into the kingdom of god. It was the ultimate aim in his political carrier to make India one such place. American historian William Roger Louis observed that Gandhi’s nationalism was ‘larger than the struggle for independence’.

‘..Ramraj I do not mean Hindu Raj. I mean by Ramraj Divine Raj, The Kingdom of God’.

Even though he proclaimed himself as a Hindu to the very core of his being, Gandhi’s concept of state was not based on shallow ethnic or religious communalism. He did not want India to be a Hindu nation. He believed the soul of India is its pluralistic culture. He wanted the nation to live in a religious harmony as it did for more than a millennium.

He wanted to reshape India into a country where people followed a moral code. Such a country is named Ramarajya by Hindus, Khuda- I-raj by Muslims and the kingdom of God by Christians. With effort and self-purification, he believed, it can be created on earth.

He formulated the term Swaraj to refer to the deep philosophy. It was as much a political philosophy as a moral guideline. In his book Hind Swaraj (Indian Home rule), Gandhi delves deeply into his concept of the state. He believed such a state will be above all the established political states.

Nevertheless, Gandhi explicitly mentions the moral superiority of the nation should not be a precursor for belief in supreme power. Once India sees itself thus, moral superiority is lost. Thus the state disintegrates from inside.

Nowadays our nationalism has so decayed that it is measured with the hatred towards a rival nation. We created slogans to make our countries ‘great again’, discounting the fact that the very idea of a nation is based on an arbitrary geographical demarcation.

If the human race becomes extinct at one point in time, the next intelligent species will be at loss on why Homo Sapiens created so many barricades on earth.

In a world ridden with shallow patriotism, Gandhian Rama Rajya may seem utopian. But how good a nation will be if it is brought together in love and high morality. It will be a great achievement over the vile regionalism and fanaticism that makes up the nations today.

Thank you for reading. Please post your valuable comments below