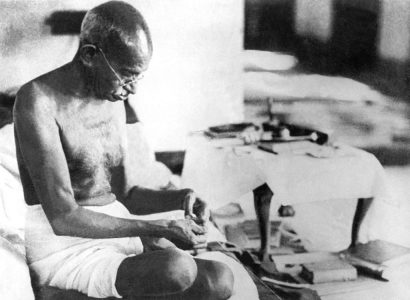 There is an old story I learned as a child..

In a remote village in India, there used to live a hermit and his young disciple. The sage always advocated a simple life and warned his disciple of the dangers of extravagant living. One day the hermit went off on a pilgrimage leaving the hut in the care of his loving disciple. The young man decided to keep the place well maintained till his master returned. So when he found a small mouse one fine morning in the hut, he bought a cat, to get rid of it. The cat did a fine job of exterminating the mouse but then there was a new problem, the cat needed milk. The disciple decided is economical to keep a cow in the house to feed the cat. Unfortunately, he didn’t know how to milk a cow. So he appointed a maid for the job. Before long, the disciple fell in love with the beautiful milkmaid and married her. He had to build a house to accommodate the two of them. By and by, the young man became very rich. Long years passed before the sage returned back to the place to find a huge manor in the place of his dwelling. Disgraced, he questioned his disciple. The young man prostrated before his master and said, “It is all because of that bloody mouse.”

As a child, I was very amused at the story but never really understood its implications. Attracted by the Gandhian ideology, I preferred a simple living. My confidence in my simple life was shattered a few days back, when I bought a new smart phone. Eagerly unboxing it, I glanced at my old phone with a motherboard complaint. I realized quickly that I had two smartphones with me now; well, three if you count the one that is stored away in the cupboard because it stopped working. Looking around, it struck me that I have two laptop computers, two wrist watches, three pairs of shoes, innumerable pairs of dresses, hundreds of books and so on. Painfully I realized that I am the disciple in the old story.

When we look around in nature, humans are the only creatures who hoards stuff. Except for some insects like ants who gather to survive a harsh season, all living things abide by the nature’s law and consume the minimum resources for survival. The only contradiction is humans, who believes piling up resources for himself is the sole aim of his existence. He will go to any lengths to amass wealth and will stoop to any atrocities to fend away anyone who seeks his ill-gotten wealth.

In fact, life becomes more complicated when we acquire unnecessary things. The market hypnotises us into believing that its products are indispensable. But the truth is we need only a few things to live happily in this world. All other paraphernalia are a burden in the long journey of life.

Do we need to build a huge mansion for our small family? Do we really need a luxury car for our short commute? Why spend so much money on that fancy wrist watch or that mobile phone when the old one is working perfectly well?

As a result of this hoarding, we have created a polarized society. When all the money and commodity in the market is concentrated to a group of people, it will result in an imbalance, which in turn causes poverty at the other end. Hence, on one hand we have billionaires living their extravagant life style, on the other someone starves to death in the same neighborhood.

The root cause for consumerism is the craving for social approval. We go to great lengths seeking appreciation, making ourselves miserable in the process. For the more things we have to manage, the more stressed we become. Ultimately no amount of things makes our lives better. That understanding will make us more miserable.

In India, ancients believed that too much of anything is poison. Be it money, material stuff, attachment to loved ones, overwhelming emotions, they kept check. They believed this non-attachment, ‘Damam’ as they called it, is the key to peaceful living.

Along the same lines, there is a new movement in the west called minimalism that upholds modest living. Minimalists own only those things that are absolutely necessary. They reject consumerist culture and embraces simple living with focus on individual passion, human relations and peaceful living. They believe that stripping away excess allows a mindful person to find more purpose in their day-to-day life and better relish the really important things in life.

There is a Sufi story:

Mulla nazarudeen, the sufi saint, became very old and knew that he will die very soon. Hesitant to be a burden on his family, he decided to do all the necessary chores for his burial. He stitched a fitting burial dress from the tailor. While trying it on in front of the mirror, Mulla became furious. The tailor enquired politely whether there was a problem. Mulla Nazarudeen threw the dress in the tailor’s face and shouted “Where the bloody hell are the pockets?!”

We are so accustomed to our gathering life style that we cannot think of a dress without pockets. Let us remember that we were born free and we can be free like the rest of the living things if can live a modest life.

Stop worrying about the pocket and start relishing the simple way of life.

18 thoughts on “Beauty of Simplicity”