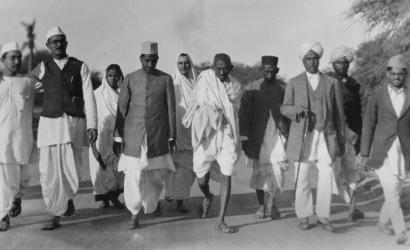 October 2nd is observed as ‘International non-violence day’ by the United Nations. The day marks the birth of a unique person who stood for non-violence and peace. A frail introvert who walked silently and adhered strictly to his convictions; Mohandas Karamchand Gandhi or Mahatma (Great soul) Gandhi as people called him.

With his unique views on non-violent protest, self-discipline and adherence to truth, Gandhi influenced masses. People trusted and followed his philosophies and found it effective. But eventually, his ideals were slowly forgotten and even ridiculed by modern generation. In the era of malice and violence, the short man in the loin cloth has a lot to teach us.

What made Gandhi Mahatma is the focus of this second blog in the four-part blog series which ventures to analyse the greatness and flaws of Gandhi as a person and as a leader. You can read the first part here

What made him Mahatma?

“I cannot teach you violence, as I do not myself believe in it. I can only teach you not to bow your heads before any one even at the cost of your life.”
― Mahatma Gandhi

Gandhi is arguably as one of the greatest pacifist ever lived. When all protests and struggles around the world resulted in bloodshed and loss of human lives, Gandhi advocated that there is goodness in everyone and an appeal to that goodness will never go in vain. Though colonialist powers used strict punishments and violence to suppress the independence struggles, under Gandhi India joined in non-violent civil disobedience, the first of its kind in the world, which culminated in Indian independence.

Experimenting and succeeding in the new ways of protest in South Africa, where he rallied for the rights of native Zulus and Indian workers for 21 years, Gandhi continued improving his arsenals of non-violent protest. In due course, it proved to be an effective and humanitarian means of achieving the rightful goals.

While spear-heading the struggles he devised, based on love and truth, he was manhandled, imprisoned and humiliated many times. Nevertheless, Gandhi maintained his composure and succeeded in convincing 350 million Indians to do the same. In spite of extremists calling to take up arms, people followed Gandhi in silence and ultimately won the heart of the world.

2) He devised ingenious ways of protest

“You can chain me, you can torture me, you can even destroy this body, but you will never imprison my mind.”

Gandhi’s ideas of protest were radical and completely new and always managed to disrupt the evil colonial rule. He traveled through out India and learned layman’s problems. He respected the cultural and linguistic diversity of India and made sure the poorest of the poor in the unreachable corner benefited from his protests.

He invented a new philosophy of ‘Sathyagraha’ (loosely translates to ‘insistence on truth’), which emphasised the pure and strong intention of the oppressed to guide oppressors to truth. Sathyagrahis protested by hunger strike and peaceful resistance to invoke the love and goodness dormant in the subjugator. Gandhi believed a Sathyagrahi should not be afraid ‘to undergo suffering, loss of property, and to endure the suffering that might be inflicted on family and friends’ but should never give in to violence. This prompted a huge wave of motivation among people and resulted in mass movements across India.

When colonialists destroyed Indian industries and promoted their goods in the Indian market, Gandhi called up Swadeshi movement which resulted in boycotting foreign goods and putting the indigenous products back into the market. This move thwarted the idea of the colonisers to make India its cash cow. He carried the charka (loom) with him everywhere and weaved his own cloths, which proved to be a great inspiration for the resurrection of small-scale industries.

On 1st August 1920, following the Jallianwala Bagh massacre, which resulted in almost 1000 casualties including women and children, Gandhi devised a mass civil disobedience movement. The success of the revolt was a total shock to British authorities and blotted out the illusion of control that the they had over India. In a historical dialogue which followed, between Gandhi and the British General

That is exactly what happened in the end

At a time when British raj drew 8.2% tax revenue from salt, one of the indispensable ingredient in Indian cuisine, which affected common people at large, Gandhi protested by travelling 24 days by foot to the Dandi beach and making salt on 6th April 1930.

The salt march or salt sathyagraha drew immense world sympathy towards Indian independence struggle. The Salt March to Dandi, and the beating by British police of hundreds of nonviolent protesters in Dharasana, which received worldwide news coverage, demonstrated the effective use of civil disobedience as a technique for fighting social and political injustice. It also helped to unite the people from all religions and sects in India.

In his historical ‘Do or Die’ speech on August 8 1942, Gandhi launched the ‘Quit India movement’ and called for an “An orderly British withdrawal” from India. The authorities responded by imprisoning Gandhi and all the congress leaders without trial within hours. But the perfectly timed Quit India struggle completely cut out the foot hold of the rulers who drained the resources from the Indian economy into the second world war.

Such protests curbed the colonial rule in India. Gandhi succeeded in gaining world attention with his peaceful protests. But his idea of ‘Poorna Swaraj’ (complete independence) was not confined to Indian independence struggle. He thought deeply on the social reformation of India; which at the time was ridden with poverty, illiteracy, religious and cast tensions. He devised plans to redeem the country of this atrocities. That move simultaneously hailed and condemned him. Many people turned against Gandhi because of his insistence on social equality. More on that in the next blog.