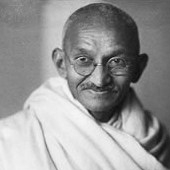 In our school days, there was an exam conducted by Gandhi peace foundation on the life of Mahatma Gandhi. So at the age of eight, I got into reading his autobiography ‘The story of my experiments with truth‘. Being the first book that I have read apart from some fairy tales, it completely caught my imagination. I was totally intrigued by the thoughts and principles of Gandhi.

“My life is my message” Gandhi

Easily one of the most influential person of the 20th century, Gandhi needs no introduction. He is widely considered as the icon of non-violence, religious pluralism, and simplicity. His philosophy changed the course of political history around the world, influencing world leaders like Nelson Mandela, Martin Luther King Jr, James Lawson, Aung San Suu Kyi and so on.

Once Albert Einstein said,”Generations to come…will scarce believe that such a one as this in flesh and blood ever walked upon this earth.” History has proven him right in due course. Gandhi is greatly misunderstood and even ridiculed nowadays mostly in his own native country. The ignorance stems from the propaganda of some neo-facist groups determined to turn India into a polarized society. For them Gandhi is a dangerous icon that, if not tarnished, can overturn their vested interests.

Sadly, most anti-Gandhians I talked to, knew nothing about the life and principles of Gandhi and their criticisms are either based on a complete lie or simply pointless. They are just vocalizing some hearsay as they never took the pain of understanding the facts.

It is in this context that I decided to write a four part blog on the life of Mahatma. Any attempt to portray Gandhi’s proverbial many-sidedness is doomed to fail because of the difficulty in congesting his legacy into partial personal views.  Yet, I am attempting to state principles for which Gandhi was known for and the facts behind the right criticisms. The narrative, I hope, will not be from the view-point of a dewy-eyed admirer nor from that of a blind detractor.

To learn more, I decided to read some books with neutral views on Bapu. I came across a book ‘Great Soul: Mahatma Gandhi and his struggle with India‘ by the American author and Pulitzer prize winner Joseph Lelyveld. Lelyveld has done a lot of research on Gandhi’s twenty-one years of life in South Africa and his subsequent return to India. He highlights the allegations against the protagonist and tries to present the facts to the reader.

Another book that I read was ‘The life of Mahatma Gandhi‘ by American Journalist Louis Fischer. It also portrays Gandhi with all his human flaws and achievements.

I feel obliged to share the concepts that caught my attention.

To begin with, Gandhi, like most mystics, was a complicated person in his thoughts and convictions. His ideas, be it Sathyagraha (hunger strike) or Ahimsa (Non-violence), are synonymous to Quantum theory in  Physics; no one completely understands it, but it works. Throughout his life he experimented with truth, non-violence, celibacy and even with dietary practices. By this constant testing, he cemented his own belief in his principles.

I shall try in the following blogs to portray achievements, allegations, pains and despairs that Gandhi underwent. Hope it would stimulate some goodness in the society that longs for a leader like Gandhi.

Feel free to let me know of your thoughts on Gandhi in the comments section below.