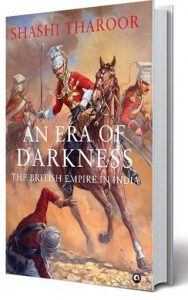 ”Conscious and deliberate bleeding of India….[was the] greatest crime in all history”

‘An Era of Darkness’ or ‘The inglorious Empire’ is a book, by the eminent writer and politician Dr.Shashi Tharoor, which factually portrays the two centuries of British Colonial rule in India,. With his eloquent speech at Oxford union, on May 2015, making the case for ‘Britain owes reparations to her former colonies’, he has caught world attention on the topic and topped it off once and for all with this elaborate and gripping narrative.

Drawing largely from the historical accounts, anecdotes and quotes, Tharoor disproves the claims of the apologists of the imperial rule.

‘An era of darkness’ analyses the looting, extortion, violence and corruption carried out by the British colonial rule in India at the same time acknowledging its benefits. He points his cynicism to the claims that political unity, democracy, education and infrastructure development were the benefits of 200 year of colonial presence.

What I liked in the book

1) Presents proofs for his arguments with stats and anecdotes

Like someone said before, you cannot argue with statistics. Instead of rude and baseless rants, Tharoor abundantly presents irrefutable demographics. For instance to prove his point that the British unabashedly looted India he writes

‘At the beginning if the eighteenth century,…India’s share of world economy was 23 percent, as large as that of Europe put together…….By the time the British departed India, it had dropped to just over 3 percent’. ‘Britain’s rise of 200 years was financed by its depredations in India.’ he adds.

The book silences the apostles of imperial rule by presenting in abundance the exact numbers with regard to the amount of money extracted from India, the number of forced mililitary recruits and subsequent casualties, meagre development projects and so on.

The astounding preciseness of arguments, which made Tharoor one of the best debaters, derives from the amount of research that he puts in. In ‘An era of darkness’, he presents the historical facts supported by a plethora of writings of historians, British officials and nationalist leaders of the time. There is no effort to smoke screen any ideas with dubious arguments.

The book invites our attention to the world view, about the colonial rule by quoting the words of eminent people of the time. Quoting the British official Mr. F. J. Shore

‘The halcyon days of India are over; she has been drained of the large proportion of the wealth she once possessed and her energies have been cramped by a sordid system of misrule in which the interests of millions have been sacrificed for the benefit of the few….. The gradual impoverishment of the people of the country, under the mode of rule established by the British Government, has hastened their fall’

3) Open attack on pseudo-nationalists and heroes

There is no holding back on the criticism towards some of the heroes of British empire. Tharoor’s tirade against Robert Clive for his avariciousness, Lord Macaulay for his racism, Lord Curzon for his self-regard and lavishness amidst famine are but a few examples.

Perhaps the most shocking exposure is that of the great war hero Winston Churchill. Tharoor sheds light on to the resentment of Churchill towards Gandhi and his ideals of pacifism and simple life style expressed during the round table conference of 1933. It gets more disturbing when Tharoor points out, with the help of Churchill’s own letters, how the British Prime Minister deliberately caused the great Bengal famine of 1943, where 4 million people starved to death. The odious behavior by which he ‘…ordered diversion of food from starving indians to the well supplied British soldiers and even to top up the European stockpiles in Greece…’, is comparable to that of a despot.

Tharoor quotes Churchill, ‘The starvation of anyway underfed Bengalis is less serious’ than that of ‘sturdy Greeks’. When a telegram was sent by the conscience-stricken British officials depicting the tragedy caused by his decision, Churchill peevishly reacted ‘why hasn’t Gandhi died yet?’.

4) Educates modern Indians and Brits on the colonial past

Though I am an Indian and have tried to read on history of Indian freedom struggle and its colonial past, nothing so elaborate has got my attention. The role of British Raj in the Partition of India, the communal riots and illiteracy has been hither though unknown. Same is the case for young Brits who have been educated on a different version of colonial history, undoubtedly glorifying it. The book demystifies such conceptions.

Sasi Tharoor has again reiterated the ineffectiveness of Gandhism against Fascism (yes, again. He does so in his other book ‘India from midnight to millenium‘). He comments, rather wrongly that, Gandhism prompts the victims to self-sacrifice to evoke goodness in the opponents. By his way of thought Gandhians would walk into the Hitler’s gas chamber without protest (India from midnight to millenium). He couldn’t be more wrong. Gandhism is about fearlessly not giving in to the evil motives of the subjugators, while taking a moral high ground of love and non-violence. Gandhi himself has written a letter to Hitler warning him of his impending fall.

2) Depiction of cultural impact of colonialism

Indians of today are largely unaware of its rich cultural heritage of 5000 years and adores western culture. This blind love was envisaged by Lord Macaulay. He writes

I have traveled across the length and breadth of India and I have not seen one person who is a beggar, who is a thief. Such wealth I have seen in this country, such high moral values, people of such calibre, that I do not think we would ever conquer this country, unless we break the very backbone of this nation, which is her spiritual and cultural heritage, and, therefore, I propose that we replace her old and ancient education system, her culture, for if the Indians think that all that is foreign and English is good and greater than their own, they will lose their self-esteem, their native self-culture and they will become what we want them, a truly dominated nation.”

Though ‘An Era of Darkness’ discusses this, the total impact of such a social outlook is neglected. The recent rise of neo-fascist political parties proclaiming the revival of Indian culture is the last of the atrocities. They are using the regret in the Indian consciousness as a leverage for their propaganda.

Spanning 8 parts, ‘An Era of Darkness’ is a breath-taking read which unambiguously catalogs the atrocities of British rule. Tharoor succeeds in building an impressive case against colonialism by recounting the arguments of the apologists and breaking them one by one.

In short, ‘An Era of Darkness’ is not to be missed not only for its historical accuracy and factual depiction of British colonialism in India, but for its witty comments and vast research which sheds light into the anecdotes and writings of an unforgettable period in world history.

I am sure that Tharoor’s new book ‘The Paradoxical Prime Minister’ will raise a havoc. But, however blind the followers are, the politics which prefers identity to performance and lofty rhetorics to worthwhile action will be over soon. ‘The Paradoxical prime minister’ will incontrovertibly prompt the beginning of the end of fascistic ideals in India.

32 thoughts on “An Era of Darkness”