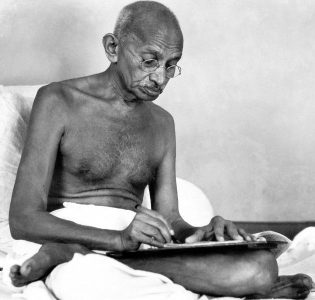 “I deny being a visionary. I do not accept the claim of saintliness. I am of the earth, earthy . . . I am prone to as many weaknesses as you are. But I have seen the world. I have lived in the world with my eyes open”

Gandhi is revered as an exceptional human being, a unique politician, and a charismatic leader around the world. Nevertheless, many accusations were perpetrated by critics who question the saintliness of Gandhi.

Despite the morally charged leadership that inspired millions which earned him the sobriquet of Mahatma, Gandhi was always bombarded with difficult decisions. Many times he had to choose between nepotism and non-violence, long-term goals and short-term requisites. Though Gandhi was condemned for many of those decisions, he never betrayed his ideologies. Some of the prominent criticisms about Gandhi is the subject for this fourth and final part of Blog series. You can read the first, second and third parts respectively, by clicking the links.

It is alleged that when Natal Indian Congress led protests against racial discrimination under the leadership of Gandhi, native Zulus were not included. The Zulu people were unorganized and very few people talked for their rights. In this circumstance, Gandhi was looked up to for leading their struggle.

But, Gandhi thought it would undermine his cause because he based his struggles against racism on the 1858 rule passed by the British Queen which assures Indians the same status as the Brits. His nonviolent protests always highlighted this rule.

Nevertheless he remained sympathetic to the Zulu cause. Later, Gandhi divulged in his Autobiography that ‘My heart was with the Zulus’. Surely, his relentless protests ultimately won the rights for natives too.

Kallenbach was Gandhi’s most loved friend in South Africa. In the years that they lived together, they developed concepts of simple living, celibacy, vegetarianism, spirituality and truth. Gandhi with a whimsical sense of humour, referred to Kallenbach as ‘Lower House’ in the parliamentary sense, who could be voted down by ‘Upper house’ (Gandhi) on decisions.

In an age when the concept of Platonic love gains little credence, the relationship between these men have raised eyebrows. Their witty correspondences has been as held as proof by the conspirers. If we can avoid the prejudice that only carnal relations can develop between two people living together, Gandhi can be vindicated.

3) Support provided for Briton in the first world war

Gandhi innocently believed the insincere promise of the British Raj to deliver progressive self-government to India, for its services to the Empire, at the end of World War 1. He hoped, ‘that India, by this very act, would become the most favorite partner [of the British], and racial distinctions would become a thing of the past’.

But, even after providing 1,215,318 soldiers and £146.2 million (£50 billion in today’s money), when British Raj refused to keep its promise after the triumphant war, Gandhi was disappointed. He considered it a treachery and launched the ‘Non-cooperation Movement‘. When World War 2 broke out, India under Gandhi vehemently protested the British Raj’s decision to declare war on Germany. This resulted in mass imprisonment of Gandhi and all other congress leaders.

“An eye for an eye ends up making the whole world blind.” Gandhi

Gandhi was an advocate of religious pluraism. But his efforts to unite the Hindus and Muslims in India was met with agitations. Hindu fanatics felt that Gandhi was too considerate towards the Muslim community. When Gandhi supported the ‘Khilafat Movement’ and fasted for providing the rightful share of money to Pakistan following the cataclysmic partition, he was antagonized by the extremist groups. Ultimately, he was assassinated by Nathuram Godse, a fanatic Hindu preacher, for the same reason.

Reality was that Gandhi never distinguished between any religions. He constantly praised Prophet Mohammed and Quran but at the same time based his non-violence on principles of Christianity and wisdom of Bhagavat Gita. He believed that the essence of all religions is love and tried to spread that love through his own life.

Gandhi embraced celibacy in 1905. He believed perfect, serene celibacy was his sole source of energy. Dissatisfied with his efforts, Gandhi constantly put to test his self control. A perfect brahmachari (celibate), Gandhi believed, should be “capable of lying naked with naked women, however beautiful they may be, without being in any manner whatsoever sexually aroused.” Such a man would be completely free from anger and malice. Gandhi demonstrated this by sleeping in the same bed as Manu, his personal assistant, with his followers sleeping the same room or veranda.

This ‘experiment’ created divide even in his personal circles. Though nobody doubted Gandhi’s intentions, they were afraid that it will taint his reputation. Nirmal Bose, one of Gandhi’s close acquaintances, constantly wrote to Gandhi, marking his disapproval. But at last, he saw signs that the Mahatma had, in fact, begun to attain the level of concentrated personal force for which he’d been reaching in the past months. He wrote “I saw your strength come back in flashes when you rose to heights no one else has reached in our national life. “

Since his time, many British authorities and skeptics believed that Gandhi was a malevolent old politician, who for all his sanctimonious talk, has very little softness in his composition. Had the skepticisms been anywhere near the mark, the climax of Gandhi’s career would be nothing more than a single line memoir, like those of the multitude of freedom fighters who laid down their lives. Instead he was hailed as the deliverer and influenced greatminds across the world. Of course, he failed in many endeavours he launched and was dismayed to the point of stating ‘let no one say that he is the follower of Gandhi’, but his philosophies are still relevant.

Gandhi’s life can be read as a moral saga in its own right, sometimes tragic in its deepest sense. The issues with which he fought still retain their importance, but what stands out after all the years is Gandhi himself. What the defamers and critics fail to see is Gandhi’s attitude which shone though difficult decisions, whose outcome would affect the future of millions.

“I will give you a talisman. Whenever you are in doubt, or when the self becomes too much with you, apply the following test. Recall the face of the poorest and the weakest man [woman] whom you may have seen, and ask yourself, if the step you contemplate is going to be of any use to him [her]. Will he [she] gain anything by it? Will it restore him [her] to a control over his [her] own life and destiny? In other words, will it lead to swaraj [freedom] for the hungry and spiritually starving millions?
Then you will find your doubts and your self melt away.”

Gandhi was not a flawless person. He himself admits to it. But if readiness to offer up one’s own body and life, ‘self sacrifice’ as he called it, were the mark of Gandhian nonviolence, a true satyagrahi, then the Mahatma’s life can be interpreted as fulfillment.

Gandhian ideology is the antidote for today’s world, tormented by racist, power mongering and downright bluff politicians manipulating masses to meet their own ends. Rather than trying to tarnish the icon, if we can just ponder the ideologies that Gandhi lived and died for, perhaps we can create a new world order based on love and nonviolence.

A transparent, spiritually strong leader like Gandhi may not happen often, but the inspiration is still there to be imbibed.