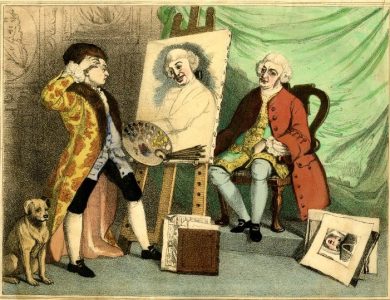 At the middle of the night, the villagers spotted a thief stealing from a house. They chased him to the nearby forest.

Running for his life, the thief spotted some ash and came up with an idea. Within seconds he spread the ash on his body and sat cross-legged under a tree. The villagers who came looking for the thief saw someone below the tree. They took him for a spiritual guru from his appearance and prostrated in front of him.

For long years, the thief posed as a saint giving advises and gaining the confidence of the villagers. One fine night, he made a great loot from the village and disappeared forever.

The two millennia-old story from Panchatantra is highly relevant today. We see the clones of the thief in many world leaders and the echoes of the naïve villagers in many societies. The question is whether we can change the ending into a better one.

We are blessed to live in this world where great ones lived, walked and acted. These great minds have made our culture and history-rich with their genius and self-sacrifice.

People like Einstein, Shakespeare and Da Vinci were brilliant in their areas and made great contributions to their field. Some like Jesus, Muhammad and Buddha lead generations into morality and spirituality. Many others like Mother Teresa, Lincoln and Gandhi through their philanthropy and high ideals influenced social consciousness.

People used to identify the learned, qualified and dignified individuals with pure ideologies and made them their idols. Everyone admired their virtue rather than their oratorical skill. Thus humanity flourished.

Taking the thief for a saint

The world has changed a lot since the last decade. People who valued quality started applauding the lofty rhetoric of the unabashed politicians and leaders. Showmen bragging about their own greatness with no real strand of quality have seized the positions of responsibility. Unfortunately, they are even leading countries.

Now, those very nations who looked up to Abraham Lincoln, Mahatma Gandhi and Winston Churchill are forced to support the shallow ones who lead them today. The inanity of the presidents and prime ministers shames the rich culture of the great nations.

In this era, a few neutral world media dare to speak out against arguably the worst leadership ever. Many of them are being silenced every day. Free media rights are violated like never before by the self-proclaimed great ones.

What is surprising is how the inept bigmouth leaders emerged in different countries at the same time! It rings the danger alarm, which if left unchecked, can be catastrophic for humanity itself.

In fact, leaders are the personification of social ideals. Hence, instead of blaming them we should look into ourselves. It may help us see ourselves under a magnifying lens. The reasons for the rise of  incompetent leaders may be:

Be it in relationships, professionalism or art, we see a dip in standard in the recent past. Everyone values showmanship over talent. The world is ruled by the fake and the flamboyant.

The incapable bragger gets promoted over the resourceful silent. The pretending unfaithful lover gets the aww’s than the honest caring husband. The charming young talentless artist sells his work better than the introverted old veteran.

So no wonder we are mesmerized by ostentatious leaders.

Aggressive nationalism, racism and communalism have captured the center stage today. We have become less tolerant of those with opposing ideas. Some may even resort to violence to prove their point.

In such a social structure, the chances are high for the emergence of a spiteful leader.

Loss of trust in Liberalism

The world earned for liberalism by the end of second world war. But it failed to deliver the unrealistic expectations of many. This created a shift in consciousness towards fascism.

With the advent of social media, everything has become advertised. Bluffing about something through these networks is considered part of the experience itself.

This answers the FAQ why some leaders now have the most followers in social networks!

Growth of self-centered and prejudiced ideology

The façade of courtesy is a cover-up for the underlying self-centeredness in many. People have become more unloving and uncaring. This chauvinism has affected all areas.

No one wants to genuinely express themselves. It is this fakeness that reflects in the leaders.

If we truly want to change the circumstances we have to be vigilant. We should adopt some methods to vet the leaders we have today.

Like every product, our leaders also have to go through a quality analysis. The quality of their ideologies should be scanned thoroughly. If it is based on communalism, aggressive nationalism or violence, it should be trashed.

The strength of all evil leaders has always been their oratorical skill. Dictators like Hitler and Mussolini are the modern-day examples of how good orators who can spread vile ideas through effective words.

If we do not want history to repeat itself, we have to close our ears to their words and open our eyes towards their action. Then we would know the right way within our hearts.

Self-advertising is the feature of the inept. When someone starts to do so, it is time to unfollow them. The same goes when they manipulate particular sects in society.

Speaking ill of the opposition, and predecessors should turn the warning light on for the followers. Only those incapable of their capacities succumb to such lowly traits.

Whatever the beginning of the story might be, it is possible to turn the narrative around. We just have to make sure we do not fall for the showmanship of the flamboyant leaders.

Let us dethrone those who desire to hide their incompetency through the smokescreen of petty shows. It is time to prove that we are righteous society, not mesmerized by their trickery. We have to opt for quality leaders above pretentious ones.

Let us bring out the thief hiding behind the robes of the saint, put him where he belongs and save ourselves from the catastrophe that awaits us.