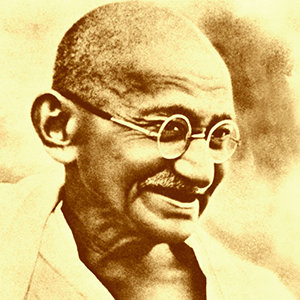 If humanity is to progress, Gandhi is inescapable. He lived, thought, and acted, inspired by the vision of humanity evolving toward a world of peace and harmony. We may ignore him at our own risk.

Today, October 2nd, 2019, marks the 150th Birthday of Mohandas Karamchand Gandhi. It was in 1869 that Gandhi was born in Gujarat, the western state of India. This day hence is celebrated in India as an occasion of great joy.

It is hard to imagine the fate of India if it was not for Gandhi. She may have achieved the inevitable freedom at last. But she would have had to cross a great river of blood to reach there.

Born to an aristocratic family, Gandhi never imagined he would one day be the deliverer of the 350 million Indians from the iron chains of colonial rule. It was the moral rectitude that distinguished him from the multitude of revolutionaries. This quality attracted great minds from around the world and they drew inspiration from the Mahatma (Great Soul).

Many perceive Gandhi simply as a meek person who stood for non-violence. He sure was the one who introduced the concept of non-violent revolution. But a close look at his life proves that he is a lot more than that.

Gandhi’s life in itself was a revolution. He questioned prevalent dogmas and laws, experimented with opposing ideologies, formed his own way of life and died for what he believed in. He developed unique views on religion, politics, medicine, and social structure. A deep study of his life provokes great respect for its proverbial many-sidedness.

Because Gandhi was a revolutionary, he was greatly feared by many conservationists with vested interests. He poses a big threat to the ideologies of hatred like aggressive nationalism, communalism, racism, colonialism and fascism. Hence it is necessary for those who believe in such vile philosophies to tarnish the icon if they want to exist.

Ideals of Gandhi are many a time ridiculed by the prophets of hatred. They earn to push the morality that Gandhi upheld into oblivion so that they can plot their evil plans effectively.

Gandhian ideologies are a cure to the world tormented by racism, violence and fascism. It sets a standard for the pretentious world leaders of today. His life, which is a moral saga in its own right, can inspire millions of young people searching for guidance.

It is a crime to forget Gandhi. A crime not because of disrespect to the sacrifice he made for humanity, but because of the darkness we will descent into if we do not heed his words.

At his 150th birthday, Gandhi would have wanted us to at least try and understand his ideas. He would have invited us to follow his footsteps and walk in the ways of love. He would have prompted us to sing praises of non-violence as he did throughout his 79 years on earth.

If we really want, we can bring back and resurrect Gandhi from the grave. It might be the best thing we can do to the human race.

In a humble effort to spread the ideas of the Mahatma, I am starting a blog series on the life and teachings of Gandhi. I am sure it will be a herculean task to holistically portray the great soul with all its factuality. But it is indeed the least I can do.

I hope I will be able to paint a clear picture of someone who cannot be confined to any single canvas. But if even one reader gets inspired and starts following Gandhi, it would be a success.