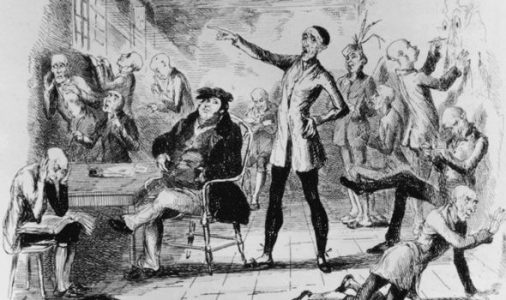 Long ago, there lived a righteous sage. Everyone in his village adored him and took advises from him.

The villagers used to gather water from the village well. One day someone poisoned the water in the well. All those who drank from it turned insane and started doing absurd things.

The wise sage understood that the problem is with the well water. He refrained from drinking from the well and tried to cure the insane but no one listened to him. Gradually everyone in the village became mad except for the sage.

Within a few days, the crazy villagers felt that there is something wrong with the sage as he is not behaving like them. They believed that he has gone mad and  banished the great sage.

The story provides clear insights into the social consciousness of society.

The Well Everyone Drinks from

The well in the story denotes our belief systems. Like water in the well, faith is totally necessary. We have to be confident in our own abilities, we have to have faith in our family members, we have to believe that we will wake up the next morning and so on. These are inevitable.

But our belief in some ideology is in question here. We hate those who question our views and defend them with all our might. We do so because we feel that our very existence is dependent on them.

When it comes to religious believes, political views and so on, our convictions can be quite blinding. It is easy to manipulate those with such uncompromising views.

Those malevolent leaders who know how to poison these beliefs can easily turn the society into a madhouse. They use this as a tool to achieve their selfish motives time and time again.

When we believe in a fascistic political ideology, hateful religious practices, prejudice towards a race and so forth, our views become crooked. Thus we act irrationally and are as good as mad.

The problem with madness is that it creates an unrealistic world and imprisons its victims. The prison feels like paradise for the inmates as they are unaware of the darkness dawning on them. They feel a false sense of security. Some even feel lucky to be imprisoned as they are afraid to face the real world.

Surrounded by high walls of prejudice, it is difficult to break in or out of this prison. But isn’t there something we can do to escape from it?

Breaking out of the Fool’s paradise

Indeed we can get liberated from the fool’s paradise. We just have to imbibe some values to our lives.

Faiths make us partial and uncompromising. Our eyes become veiled with premonition and hence we fail to perceive reality as it is. We only see those things which reinforce our beliefs.

If we want to break out of prison, we have to learn to approach everything without the burden of prejudice. Such open-mindedness can change our attitude towards everything.

When we support a political or religious organization, we never listen to opposite ideologies. We assume that we are always right and the others are always wrong.

If we realize that we, as humans, are as fallible as they are, we will heed their opinion. This will, in turn, result in cultivating respect towards the opposition and imbibing good things from them.

All ideologies demand unquestioning faith. But such an intellectual surrender will never nurture growth. Everything needs to be renewed and revived in time and passed through the sieve of intellect if it has to be accepted.

Mostly we follow a religion or a political ideology because we were born to those who believe in them. We never had the opportunity to vet these views and arrive at our own conclusions. Well, why not try it now?

Assigning superhero images to leaders and following their opinions blindly is unhealthy. Those who do so in effect surrender their will and become mindless robots and even potential soldiers in the hands of their leader.

This conundrum can be avoided if we abandon idolization and adopt discretion. Be ready to discard hateful ideas if it is against your values and morality. Even if the vile concept is propagated by the leader you believe in.

Banishing Oneself from Fool’s Paradise

Staunch believes can provide a false sense of security and volatile happiness. Many are trapped in this fool’s paradise throughout their lives. Unfortunately very few breaks out of it.

It is difficult to live in a society without confirming to any ideologies. Like the saint in the story, most rebels have a rough life. But the pride of living with dignity is reassuring.

The best practice is to not drink from any wells. If that feels impossible, at least we have to make sure that our wells are not poisoned. Let us make sure no one turns our world into a madhouse.

Thank you for reading. Please leave your comments in the comment box below.