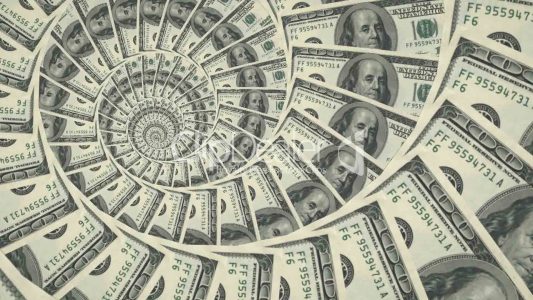 “Money often costs too much.”

There is an old story

A widow and her little child were returning from the forest collecting wood. Suddenly, a voice called out from the nearby cave. It proclaimed the immense treasure inside the cave and said the widow can take whatever she wanted. The door to the cave will open on a bell and close permanently after 3 minutes following the second bell. Joyfully the widow jumped into the cave with her son on the first bell and quickly collected as much as she can carry. On the chime of the second bell, she moved out with the treasure and the cave door closed behind her once and for all. While happily counting the fortune, the mother realized with a shock that she had left her son inside the cave.

I have always felt a knot tightening in my throat every time I read this story. The tale is the perfect parable for our life, dictated by the over attachment to wealth. While greedily amassing worldly fortunes, are we missing the eternally valuable things?

The search for the goal of life has been going on ever since human history. In the short period between birth and death, people pursue a lot of things in search for a happy and comfortable living. It is a natural tendency to equate happiness to the riches that we posses. But is this really true?

A research on happiness

One of the longest studies, conducted by Harvard University, spanning 80 years, to find out the factor affecting a person’s happiness, has arrived at astonishing conclusions.

Originally starting with 268 Harvard sophomores, the study expanded to include more than thousand people from all walks of life. The research found out that, it is not money, fame or possessions that keeps a person happy though out his life. The only factor that is important, argues the current director of the research, Robert Waldinger in his TED talk , is ‘Quality relationships‘ that the person has in his life.

Unfortunately, we are so consumed in the rush for money that we neither have time nor energy to develop nurturing relationships. We miss out on many things in this frenzy and are oblivious to it until it is too late.

The sad truth is, rather than earning money for living, we live for earning money. We need everything in surplus and when we have that, we want more. This avariciousness has hindered our personal growth, love and spirituality, the corner stones to eternal joy.

All great minds have abhorred fortunes and embraced a simple living. People like Francis Assisi, Gandhi, Walt Whitman and Leo Tolstoy have even considered money dangerous, if not evil.

Instead of blindly following the luster of money, they have dedicated their lives to spiritual and humanitarian causes. Without argument, they have left behind a legacy of their own and were easily the most happiest people ever lived in spite of their minimalist approach to life.

In fact, the more fortune that we have, the more we have to spend to maintain it. This becomes a vicious cycle of buying and working hard to earn money for maintaining it. Ellen Goodman, Pulitzer prize-winning journalist and writer has put it very eloquently.

“Normal is getting dressed in clothes that you buy for work, driving through traffic in a car that you are still paying for, in order to get to a job that you need so you can pay for the clothes, car and the house that you leave empty all day in order to afford to live in it.”

Few people see the irony behind this. Those few try to escape from this imprisonment. Others keep going with the society’s flow, unaware of the great fall awaiting them.

Who is really wealthy?

Richness is not something that can be measured with the amount of money that someone posses. Rather it is the quality of life and happiness that he/she enjoys, the ways in which they have influenced the society, happiness they have spread through their kind actions and so on that signifies a fulfilled life.

More simply, love is the greatest fortune anyone can posses. What good can the money do to the mother in the story who lost her child in the pursuit of that very treasure. It would torment her to death that her greed led to her greatest misfortune.

Instead of being hell-bent on amassing lucre, wouldn’t it be better if we are contend with what we have? Won’t it give us the freedom to pursue the eternally important, if we can break out of the reins of money?

What is your opinion on the topic? Feel free to post it on the comment box below