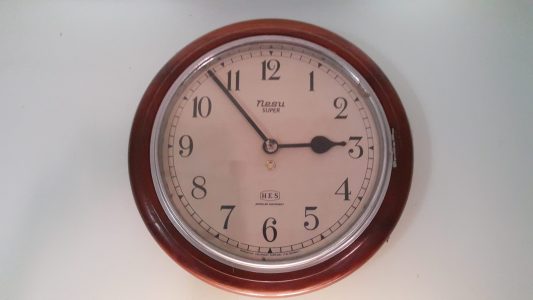 A few days before, while frantically dressing up for work, I looked at the clock to see how late I am. But irritatingly, it wasn’t working. I felt a wave of rage towards the old clock and complained to my mother that it was too old and it is time to dump it. She looked at me in a peculiar way and said, “I shall rather throw ‘you’ out!!”. Impressed by her quick wit, I laughed and kissed her good-bye. On the way to work, I kept thinking of what she said. She was right. The old clock is too valuable. It has so much history behind and deserves much more respect.

Taking things for granted is typical human nature. Many things, animate and inanimate, are indispensable for us. But in the rush of life, we fail to notice how important they are. The truth is that these trifles make our life comfortable and worth living. With a bit of scrutiny, we will have a better appreciation for life itself. I realized that our clock is something in that category.

The circular clock with its wooden frame, metallic bezel, fifteen-inch white dial and huge numerics was actually very elegant and eye-catching. I felt amused as a child when my dad magically opened the front glass door to adjust the time. But as I grew up and life became much hectic, the clock’s importance was not really appreciated, though I looked at it almost twenty times a day.

The ‘time machine’ has been around ever since I can remember. It was there to welcome me when I was brought home as a newborn. It bore witness to my childish plays, laughter and tears, hectic exam schedules, my graduation and other important moments in my life.

Feeling ashamed that I am so ungrateful to such an old friend, I decided to know more about this antique and started enquiring about it. The more I found out, the more I became impressed.

The History of the Time Machine

To narrate the story of the clock, I have to first give a glimpse of my late uncle from my mother’s side, Raphael Kollanur or ‘Big Daddy’ as we used to call him. As the eldest son in the family of eleven children (enough to make a soccer team!), he was looked up by everyone. Being extremely gifted, highly capable and eternally feared, he formed a heroic image and hence attracted a lot of friends.

So, on his wedding day, that is 8th May 1969, someone ( my investigative journalism failed to find out the name) presented him with this valuable gift. My other uncle Chacko remembers that it cost around 400 Rupees at that time. That comes to around 20,000 INR (almost 350 dollars) in today’s money. Big Daddy was working at Hindustan Machine Tools (HMT) then and the machine adorned the wall of his house in Kochi (Edappally to be exact). When he moved to Mumbai in 1973, he took it with him where it remained till ’75. Big Daddy gave it to my grandmother when he moved to Middle East and subsequently to US where he went on to become the manager in the City of Corpus Christi in Texas.

In the long 49 years, the time machine has been through a lot. I heard several amusing stories about it. One anecdote is worth sharing.

In 1980, the clock suddenly stopped working one day. My Ammamma (Grandmother) became upset not only because she had no money with her to repair it but also the monthly prayer meeting was due in her home. Feeling ashamed of people seeing the dead clock, she planned to move it to the attic. But astonishingly, the faithful timekeeper automatically started working an hour before the prayer meeting and it worked perfectly throughout it. Ammamma believed it was a miracle and praised the Almighty for his benevolence. Unfortunately, the miracle lasted only for three days and the clock had to be repaired anyway.

My Ammamma was a very generous old lady. Because of her altruistic nature, many valuable antiques at home ended up with some poor family who came asking for help. But she neither gave the clock away nor parted with it even for a day. Pawning objects for money was normal at the time. The family went through a lot of difficulties but Ammamma never pawned the clock, though she might have got a decent sum. Maybe it reminded her of her eldest son who is thousands of miles away. On her bedridden last days, she insisted on hanging the clock opposite to her bed so that she can look at it all the time. After she passed in 1989, my mother took it home. And it has remained with us ever since.

The clock subsequently stopped in 1993 after two and a half decades of meritorious service. But my dad was a person who would not give up that easily. When all the efforts to bring back the keying-mechanism to life failed, he performed a ‘heart transplant’ whereby the mechanism was replaced with a Swiss made battery-powered one. Everyone sighed in relief when the new system worked perfectly. But my nine-year-old brother believed that he can repair the discarded mechanism. With hours of concentrated effort, he converted it into total scrap. It had to be thrown away at last.

My early memories of the clock

Though my dad was very careful with the old time machine, me and my brother were not. I remember one time when we made a dent in it while we were playing ‘indoor cricket’ against our dad’s orders. We were deeply relieved when the mark went unnoticed by our parents. But the days of peace didn’t last long as the time for battery replacement came sooner than expected. Dad was furious when he found out and mom didn’t come to our rescue either.

Frankly, as a child, I had some resentment towards the clock as it was behind it that my dad usually placed his cane which he used on us very often. It was the only place me and my brother couldn’t reach, as it was too high up in the wall. So destroying the cane or hiding where dad can’t find it at the time of ’emergency’, was out of the question.

The most loved antique

Through the years, our family moved from two houses. Though many old things were half-heartedly left behind, the clock unfailingly found its place in the ‘handle with care’ box. The left behind stuff might have been jealous of the old clock. Eventually, many new generation clocks came and tried replacing the grandpa. But all of them met with the same fate; dishonorable discharge! To this day the old clock enjoys the prime position in our home.

Even though the clock may not actually fit into the category of ‘antique’, its value is immense. In the half a century-long journey, it was passed down through three generations. The distance that it traveled, the walls adorned, the emotions carried, the people it reminds of, the lives that were touched….my mother is right, it is better to throw me out than the historic timepiece.

9 thoughts on “The Time Machine”