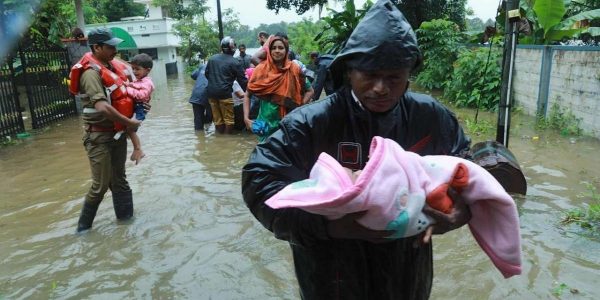 My land Kerala, which adorns the southern tip of the vast country India, has always boasted of the moderate climate and naturally endowed living conditions. Daring even to advertise itself as ‘Gods own country’ to the tourists and travelers who, mesmerized by the spices and aesthetic beauty of the region, sailed from distant lands since 3000 BC. But the past month (August 2018) saw an unprecedented deluge that drowned everything that Kerala was known for. Affecting more than 1 million people directly and more than 50 million of its inhabitants indirectly, the floods have assumed demonic proportions unlike anything before.

The reasons for the calamity has been attributed to many aspects, all of which put humans in trail. But here I am more concerned about something that I saw during the floods; the faces. Different faces with unique emotions. Some of which will linger in my memory forever.

I have seen terrified faces of the children, their innocent eyes searching for the familiar and loving faces of their parents’. May be they want to throw themselves to the security of their mothers’ arms. No amount of  consoling or cajoling could erase the fear that has befallen them. I felt the images will haunt them throughout their lives.

Some faces were full of desperation and hopelessness. Perhaps they  worked hard their entire life to secure a house and safe living conditions for themselves and their loved ones. To see their hard earned life being swept away in a matter of seconds would have left them traumatic.

Many old and wrinkled faces were seeking kindness. They were too weak to lament their ill fate. They just needed someone to care for them in the refugee camps. A bit of kindness would make them happy.

Numerous faces were gleaming with determination. The military, police, fire force and some private rescue teams. In the thick of the crisis they had only one goal: to rescue as many people as they can. Nothing but the safety of all would satisfy them. If not for these selfless people, it would have been a catastrophe.

Innumerable faces shined with kindness. The volunteers, running busy as a bee, between the victims of the deluge, their words filled with consolation and actions reflecting the long forgotten goodness in humanity. Most of them were random people who had no label of any organisation. The love inherent in them forced them to aid for the people in need.

Empathetic faces watching the calamity through the media and suffering the same agony of the victims. Unable to serve their fellow beings physically, they helped to share the news of the stranded through social media, and  resorted to prayers in the hope that the Omnipotent will take care of everyone.

Radiant faces of many who learned to transcend the boundaries of religion, cast and political inclinations. Delighted to let go of the differences and perceiving humanity above everything else. They seem to have understood the secret to happiness itself.

Unfortunately a small number of faces were filled with selfishness and greed. People who sulked in the corners hoping to take away a part of the provisions of the refugees to their safe and sound homes, some retailers who tried to capitalize the situation by selling their products at higher prices and so forth showed the heinous face of mankind. The good news is that the number of such faces were negligible.

The physiognomy of some political leaders were  unfathomable. Though their faces were overlaid with kindness, their eyes shone with opportunistic and selfish motives.

A few faces were negligent. The national media who found the catastrophic floods in Kerala as a ‘Non-Breaking news’ which would in no way improve their viewership, the governing bodies of some neighboring states who upheld the differences at the time for aid and so forth.

All around the globe, countless faces were immersed in prayer. They hoped the crisis will end and the sufferers will be rehabilitated as soon as possible.

Coming to think about it, it is so uncanny, the deep revelations the deluge brought to the observer. The vanity of things that we hold dear in our lives, futility of a life time of effort, the need for true friends and so on. On contemplation, the disaster prompts us to reconsider our priorities in life. Wouldn’t it be better if we rebuilt the society without walls that separate and imprison us, throw away that ‘trespassers will be prosecuted’ sign from our egocentric lives and open up to be a loving and interdependent society that stays united in spite of all the differences.

If we can perceive the flood as an opportunity to restructure everything, it would effectively reduce the impact of the calamity and all the faces will radiate with benevolence and compassion unique to humankind.

2 thoughts on “Faces in the deluge”