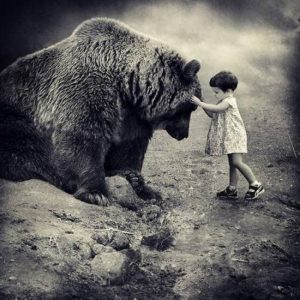 A man was sitting in his veranda enjoying the view of his garden. He used to love the flowers and put a lot of effort every day tending to them.

Suddenly, a stranger came wading through the garden, trampling his beautiful flowers and shoots. Enraged, the owner ran towards him, caught him by his neck and threw him out.

But sudden remorse fell on him as he realized that the stranger was blind. He had lost his way and got there by mistake and was trying to find an exit.

The story always creates a lump in my throat. We are like the owner of the garden who behaves rashly towards anyone who strays from the path and accidentally tramples everything in their way. We are supposed to lead those who are blind with ignorance back to the right way.

The world is now moving towards the dangerous ideology of hatred. The three areas reflects it well.

World politics is once again moving to fascism. Machiavellians masquerading as leaders, pollute the positions of authority and use their power to spread hatred, racism and non-secular agendas. Followers naïve enough, blindly follow these leaders and their propaganda unaware of the darkness they are moving into.

Love for one’s country is necessary. But it becomes evil once it is defined by how much one hates a rival country and its citizens. Closing doors in the face of the refugees instead of extending a welcoming hand in the name of national security have become the norm today.

Religion, which is supposed make one virtuous, has become playground of violence. I cannot help but wonder whether there is a more obscene idea than killing someone in the name of god!

The reach of this transforming social consciousness is far and wide. From religious and political leaders whom people look up for guidance to those we love and respect, get pierced in its evil claw. It crushes to see them lose their way because of the narrow and myopic vision.

Naturally, we get agitated when encountered with these atrocities. We react with arguments, verbal abuse and violence. Though our intention is to rescue them from the bear trap, our reaction triggers more hatred.

‘You cannot wash off blood with blood’

We approach the problem like the owner of the garden in the story. Arriving into fast conclusions, we act out of rage, resulting in violence. This creates a negative effect.

People fall for hatred because of their naivety. One should adopt a soothing voice of compassion if he wishes to put an end to the cries of hatred. Feeling pity for the ignorance of people will bloat out his frustration, and will fill him with love.

“Forgive them, for they do not know what they are doing”

The only answer to the hatred and fascism is love and compassion.

The way of the heart

It is not easy to feel compassionate towards anyone who propagates hatred. We easily fall for arguments and violence. It is hard to surrender our ego to fully accept and love someone with such prejudices.

Leaders like Martin Luther King Jr and Nelson Mandela have proven that love triumphs over hate. Mahatma Gandhi with the sheer force of his personality overturned the British colonialism. (Read my blog series on Gandhi’s life here)

The way of violence is quick and may provide momentary success. But soon the resentment and hatred resurface and retaliation is inevitable.

The way of love is slow and tedious but achieves complete success and no one is hurt in the process. Let us use compassion and empathy to pull out those who fell into the quicksand of spite before it completely drowns them.

It is time for war, a war of love against the darkness of hatred befalling people. Sound the trumpet! March forward! Let us capture the hearts of our brothers.

21 thoughts on “The voice of compassion”