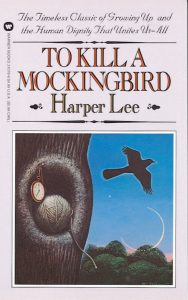 Ever since being impressed by watching the Academy award-winning movie by the same title a decade back, I was yearning to read the book To Kill a Mocking Bird by Harper Lee.

My eagerness culminated in me thieving the book from the personal library of my dear friend Hemlal. There is no need to feel guilty, as he is settled in Canada and is unlikely to visit his parent’s house until next year– I consoled myself.

The book completely captured my imagination, contrary to my belief that I cannot enjoy fiction any longer.

To Kill a Mocking Bird is the account of the life in Maycomb county from 1933 to 35, through the innocent eyes of six-year-old girl Jean Louise Finch AKA Scout. Her adventures with her elder brother Jeremy, nicknamed Jem, and Dill, a summertime visitor at his aunt’s house in the county, paints the first part of the novel. Together, the three imagine terrifying stories about their reclusive neighbor Arthur “Boo” Radley and hatch plans to bring him out.

The second part portrays the trial of Tom Robbinson — a negro wrongly suspected for the rape of a white girl Mayella Ewell ­— whose defense is trusted on Scout’s widowed father and lawyer Atticus Finch. Though Atticus tries to prove Tom‘s innocence, much to the disapproval of the white folk in the county, the prejudiced jury convicts him.

Mayella‘s father and the town drunk Bob Ewell, infuriated by the trial, publically spits at Atticus‘ face and later tries to kill the children, who are saved by Boo Radley. Ewell gets killed in the altercation.

Scout escorts Boo back to his house. After he closes the door, the story ends with her standing in the front porch imagining the world from Boo‘s perspective.

Lee’s simple, non-pretentious and highly cinematographic style of writing, where the scenes flow effortlessly by melting into another, provides a seamless reading experience. The narration relies on satire, irony and mocking of the prevailing racism and hypocrisy, through the unbiased and innocent perspective of a child.

Reviewing one of the most read books in the last century is unnecessary. So I am giving my impressions and takeaways from it.

1.The prejudice of the society

The book is relevant even after half a century of its publication because it portrays a perennial problem: discrimination.

Everyone, except Atticus Finch, in the story is biased in one way or the other. Maycomb society which laments the Holocaust and discrimination against Jews, entertains racism against the Negros. Scout‘s Aunt Alexandra, though not a racist, has her own impressions about each family in the county. Scout, Jem and Dill, who cannot wrap their heads around the bias of the adults, are unnecessarily terrified of Boo.

The peak of racism is portrayed in Mayella and Bob Ewell who accuses Tom Robbinson of a crime he didn’t commit and wants him to be executed for it. The flawless argument of Atticus, which proves without a doubt that Tom is innocent, fails to change the prejudice of the jury against a negro.

Atticus, in contrast to others in his county, is a liberal and transparent person. Not only is he a staunch believer of humanity, but he also has strong integrity and piety. He shows Gandhian tolerance when Bob Ewell spits on his face and comments humorously that Mr. Ewell ought to stop chewing tobacco.

Even when labeled as negro-lover and being hated by his own kin for defending Tom Robbinson, Atticus remains nonchalant. He points out the good side Mrs. Dubose ­— the lunatic old lady on the neighborhood who constantly insults Jem and Scout­ with verbal abuse — and asks Jem to read for her every afternoon.

Atticus’ belief in the virtue inside everyone, conforming to Gandhian ideology, is the highlight of the story. All discriminations are based on judgments on the color of skin, religion, nationality and so on. The antidote for such bias is valuing a person for the goodness inside.

If we can overcome our hypocrisies and demolish the walls that separate us, we can lead a loving life and respect even those who oppose us.

An instance in the story completely captures the reader’s heart. A mob of attackers, intent on lynching Tom Robbinson, is won over by the naive comments of Scout, who recognizes her classmate’s father in the group. The situation effectively conveys the power of innocence.

While handing air-rifles for Christmas, Atticus warns his children that, although they can ‘Shoot all the blue jays’ they want, they must remember that ‘it’s a sin to kill a Mockingbird’. Scout later learns from Miss Maudie that mockingbirds never harm other living creatures and they simply provide pleasure with their songs.

Mockingbirds are symbolized as guileless creatures in the story. The book pleads for protecting the rights of marginalized people like Tom Robbins and Boo Radley from the biased view of society. It also is a warning about losing childhood purity and trust in humanity.

To Kill a Mockingbird is more than a classic novel, it is an appeal to the innocence and goodness of humanity

Thank you for reading. I would love to hear from you. Please post your comments in the comment box below.

5 thoughts on “To Kill a Mockingbird”