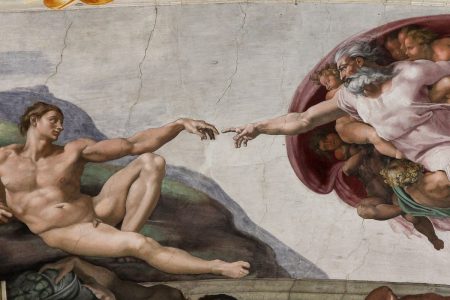 Charles Darwin’s theory of evolution may be the single most important and revolutionary scientific theory of all time. No other concept has made such a profound impact on human race. The theory of intelligent design was dethroned and finally science gained upper hand over religion.

Humans undoubtedly enjoy the most benefit out of the whole process of evolution.  We assert that our race is the most sophisticated creature to have evolved in the face of the earth.

Pierre Teilhard de Chardin, the French idealist philosopher and Jesuit priest, in his famous book, ‘The Phenomenon of man’, argues that, ‘in the tree of life, humans are the flower’. Hence it is widely agreed that we are the pinnacle of the evolutionary process.

But has the evolution stopped? If not, to what will the Homo Sapience evolve to? I think the process would more be an inner evolution rather than an outer one.

As a race we have achieved the unachievable during the past two centuries. The scientific discoveries and achievements are a testimony of our evolving intellect. But is intellect the only facet of our evolution?

I believe that spirituality is a great untapped potential that lies dormant in us. Though we try to understand everything through our well-developed intelligence, spirituality is not a property that can be conceived through equations.

Nevertheless, modern science has stumbled upon some unexplainable anomalies which has the power to over write all the ideas and preconceptions of our race.

It is almost time for the human race to turn her sight from the fleeting experiences on the outside, to the silent presence on the inside. Thus marking the beginning of spiritual evolution.

As with any kind of evolution, the effort should be from the part of the race who enjoys the benefit of the same. The long neck of Giraffe due to concentrated effort of generations to reach to the highest branch, is the best example.

Sadly, our spirituality is stuck in the mere primary level of taboos and rituals. Although they are inevitable to the start of the journey, blindly clinging to them will hinder the development of the person.

Instead the person has to grow out of these belief systems and seek the ultimate whole heartedly.

Journey towards the ultimate

All spiritual philosophies have some guidelines for the aspiring seeker. Astonishingly, parallels can be drawn between many philosophies, whose supreme goal is to reach Godhood.

From ancient Greek philosophies, Hinduism, Buddhism to Christianity, the ultimate aim of all is the union with Omnipresent. Plato, Aristotle and even Stoic philosophers believed in evolving to become the Almighty or Imitatio Dei (imitation of God).

Ancient masters believed that the two stages of spirituality are katharsis (purification) and theoria (illumination); the ultimate point of illumination being union with Omnipotent.

Catholic theologians took the same idea and expanded it into three spiritual stages; via purgativa, via iluminativa and via unitiva.

The first phase, via purgativa, is where the religion comes in. To repent, cleanse and purify oneself is the aim of this phase. Once the seeker completes this process of catharsis she moves on to the second stage.

Via iluminativa, the second stage, prompts the seeker to intelligently analyse the stories, clues and teachings of the masters. By meditating on them, she discovers the deep secrets of spiritual life. This process equips her for the long and arduous journey.

In the third phase, via unitiva, as the name suggests, the seeker achieves revelations and unites with the Omnipresent.

The first step is universally known; purification. By catharsis the seeker has to give up all prejudices, and preconceptions and start seeking with all her heart

“If anyone desires to come after Me, let him deny himself, and take up his cross, and follow Me.”

When all desires and materialistic urges subside, she will start seeing the superficial existence that surrounds her. The hollowness of life will prompt her to live a more quality life. Rather than sticking to the periphery, the seeker will live a life more fully.

Michelangelo‘s fresco ‘The Creation of Adam’, the featured image in this blog,  which originally adorns the ceiling of the Sistine chapel, has given rise to many speculations and controversies. The meaning of the painting has been much debated since its portrayal in 1512.

A close look at the painting, reveals its intentions. God depicted in the picture, lovingly extends his hand, inviting Adam. But Adam on the other hand, leans back and keeps his hand not even fully extended. This laziness from Adam’s part creates a distance between his hands and  that of God’s, which acts as a barrier between him and paradise.

The invitation towards enlightenment is ever-present. But it cannot be achieved if we do not come out of our comfort zone and make an effort ourselves.

If we rely on ancient wisdom, and muster the courage for a spiritual journey, we surely can bring about spiritual evolution, which will incontrovertibly mark the begin of a new era in human history.

I would love to hear from you. Please post your valuable comments below