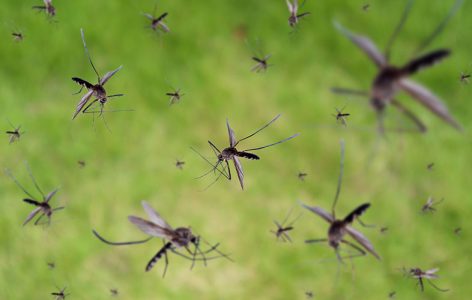 I cried as I jumped up from my sweet slumber. Something bit me.

My once-in-a-blue-moon sweet dream slowly evaporated. The pool of gold coins suddenly turned into my uncomfortable bed, and the blonde beauty I was cuddling turned into my old pillow.

Disgruntled, I switched on the light. It took my tired pupils a while to adjust to the fluorescent glow. Then I saw them.

The cold-blooded beings who lurk in the dark and suck hot blood from their victims. These merciless creatures are depicted in the movies in human form. However, in reality, they manifest as insects and are at best one centimeter big. We fearfully call them ‘MOSQUITOES’ (thunder rumbling in the background)

No, do not laugh them off. Mosquitoes have spewed mischief eons before humans appeared on the face of the earth. Their melodious songs and stinging bites have given sleepless nights even to T-Rexes! And, million years later, they cause the death of almost 700,000 humans every year.

My land is known for its astounding population of mosquitoes. Their number far surpasses the number of humans, so much so that if there were a vote for who rules the city, and if mosquitoes could vote, they would incontrovertibly win a landslide victory. (Maybe they would appoint a mosquito Mayor. Wonder what decisions she or he or it would make. Filthier drains for pupae?)

Such an invasion, if it occurs, can end human supremacy. Like our ancestors, we may have to fight for the upper hand again; this time with mosquitoes.

Well, I am not against a formidable foe. In fact, I respect the species’ resolve to survive despite millions of years of shooing, squashing, and stomping. But the audacity of the parasite to get inebriated with my painstakingly produced blood, without even bothering to ask for permission, is insulting.

However, I am forced to bow before their resilience. In the hope to butcher them in millions, we have cooked up many evil plans. Nevertheless, mosquito repellents — be it liquid evaporator, body cream, even ultrasonics (I am curious how that works; blowing off their eardrums?) — have failed miserably to deter the insect’s determination to drink human blood. Only a mosquito net can keep us out of their reach. But in the humid equatorial climate like ours, these nets bake us like a hot oven.

I sometimes feel that the mosquitoes are laughing hard at all these circuses during their evening beer.

Stinging at a bad time

One thing that I find annoying is the timing of their assault. After all the stress from work and all the discords at home, the only relief people get is the sweet oblivion of sleep. It is outright atrocious to sting them at the time and bring them back to the harsh real world.

Any other time would have been fine. If I had to say, my working hours would be perfect. Then I could excuse myself for not meeting the deadline saying I was working to save the lives of 700,000 humans! “Are you so narcissistic as to believe that your petty project is more important than that?” I can ask.

I would love to see the look on my employer’s face then.

One thing I am sure about is that mosquitoes are here to stay. Given they have survived eons of humiliation and attempted genocides, they will continue to do so for centuries to come. If we colonize Mars in the future, I am sure that they will happily hitchhike with us to the new planet.

The bottom line is that there is no other way than to coexist.

Maybe we can reach a mutual agreement: The mosquitoes will stop biting us, but we will set up a blood bank where they can drink enough blood. Every human should be made to donate 100 milliliters of blood to this bank, like paying tax.

Maybe we can add bed bugs also to this welfare program. Then maybe, just maybe, I can sleep like a baby and dwell in my sweet dreams.