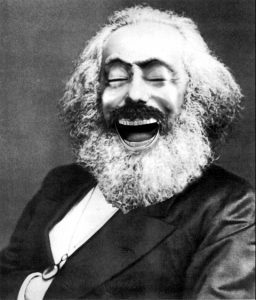 A zen master proclaimed his intention to visit the palace of the king, who happened to be his disciple. Hearing about his master’s arrival, the King made colorful arrangements to welcome the wise sage.

On the day, a huge crowd including wise men gathered. The King himself waited at the palace door with great reverence to receive his renowned master. The atmosphere was filled with awe and there was pin drop silence.

The master appeared after sometime. While respectfully welcoming the master, people noticed that he had only one shoe on. The other one was tied on his head and he was limping quite comically. The King and his wise men became bewildered and couldn’t understand what the great master was symbolizing.

The King gathered up his courage and asked,

“O wise master, we know that you are trying to  convey to us a great truth symbolically. Kindly explain to us what it is.”

The great master replied with an innocent smile

“I was just trying to make you all laugh by playing fool!”

The world is full of very serious people who act and talk in a matter of fact way. A grave face and serious tone has become the norm for efficiency and professionalism. Thus we came to the misconception that to gain respect, we have to act according to Victorian decorum.

The Mask of Personality

Our social upbringing has taught us that it not nice to honestly express our self in many social situations. So we have made a façade according to the social needs that we call as personality.

The etymology of the word ‘personality’ shows that it derives from the Latin word ‘Persona‘, which means ‘mask’. Our personality is a mask that we wear to fit into social conventions.

Unfortunately, through years of practice, we forgot our original face, and believed that the senseless mask is the real one. Thus we live a life to satisfy some stupid conventions and become grumpy and miserable.

The Weight of Ego.

Because we are living in a world where everyone is grave and even a tinge melancholic, we have become too egotistic and serious. Our ego is so inflated that even an innocuous comment creates a dent in the armor and we become frustrated.

The one who carries an ego is always vulnerable. He has to live in eternal fear of someone challenging his self-importance and is forced to act in defense of his amour propre.

The acute form of this self-respect can make a person Narcissistic which results in catastrophic outcomes.

The art of not taking oneself too seriously

We have to learn to let go of our ego and live light-headed. To achieve this we should really be confident and comfortable being ourselves.

Most people are afraid that they will be thought of as idiots if somehow they let down their guard of seriousness. But these guards often become prisons of unhappiness.

Laughing at own mistakes

Everyone laughs at other’s mistakes. But when it happens to us, we do not take it so light-heartedly. The fear of making mistakes and being ridiculed often keeps people from even attempting new things. This is a grave mistake.

If we can laugh at and even make fun of ourselves, we will not become so vulnerable. We should be ready to take chances and allow us to make mistakes.

Once you laugh at yourself, you will find it is great fun, and astonishingly, other’s stop doing that immediately.

Contradicting oneself may be the greatest fear of many. But to grow is to constantly contradict and challenge one’s past self.

Believes need to be restated, relations need to be rebuilt, ideologies need revamping. As one moves forward many such belief systems which were dear, will appear unimportant and idiotic. Some one who fears contradiction will never grow.

Many find it difficult to forgive themselves for the sins that they have committed. This undoubtedly results in self loathing and can develop into psychological complexes.

Everyone including ourself are allowed to make mistakes. No one is perfect. Though striving for perfection is good, unforgiving perfectionism is suffocating.

We all act and respond to situations deriving from past events. Sometimes our traumatic experiences forces us to create armors to protect us from being vulnerable.

But more often than not, these armors become prisons that enslaves us. To escape from this subjugation we have to let go of our emotional baggage.

Someone with a very neutral self-image, will have good relations and will certainly be spiritually evolved. As she is non-judgmental towards herself, she can be amiable and considerate towards others.

She will perceive the flaws in herself and can be empathetic to those who suffer from the same plight.

As children, we were never concerned of our self-image. This innocence made life so easy and simple. Once we evaluated our role in the society and started acting according to expectations, life became miserable.

This is not to say that we should act like children and make situations awkward.

But at least once in a while we should be confident and courageous enough to play the fool like the wise master, who was unconcerned about his image in front of his disciple and crowd of admirers.

Let us give up our masks and shed the weight of our ego. Let us live free without being too concerned of our constricting social image.

12 thoughts on “Laughing at Oneself”