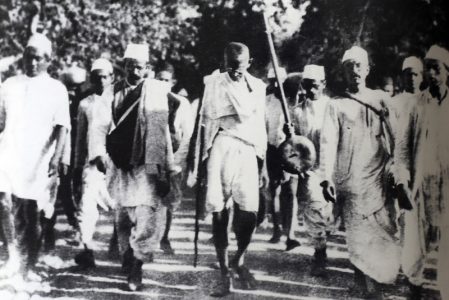 The simplest acts of kindness are by far more powerful than a thousand heads bowing in prayer.

Gandhi believed that all actions, including independence struggle, should be fueled only by love. The world thinks it is common to act out of passing emotions. But Gandhi taught that a seeker of truth cannot justify any action that sprouts from lowly emotions.

The force which drove all Gandhian struggles was empathy. It can be argued that it is the value that made Gandhi what he was. He always urged to think about the poorest person in the society when in doubt about our action. If it benefits the least, it is the right thing.

Many instances in Gandhi’s life testifies to this value

Following the Treaty of Sevres after the First World War, the influential territories under the Calif of the Ottoman Caliphate was largely reduced. This was against the promise of the European powers to protect the Ottoman Sultan’s status as Calif. Under the treaty, territories like Palestine, Iraq, Egypt and Lebanon were severed from the empire. The loss of Mecca, where the sacred shrine Kaabah is located, from Calif’s power, hurt the Islamic feelings worldwide.

The British, a leading force in the Allied powers, were part of the treaty too. Muslims in India under the leadership of Shaukat Ali, Mohammad Ali Jauhar and Abul Kalam Azad grouped and led a protest. But no other sects in India supported their cause and hence it was very weak.

Upon a deep study of the issue, Gandhi understood the religious sentiments of the Muslim community. He summoned the Indian National Congress and people from all other religions to join the cause. He conducted speeches, wrote articles and letters to bring to light the morality behind the struggle. he writes

“…I hold it is true that the Indian Mussalmans (Muslims) have a cause that is just and is supported by scriptural authority, then for the Hindus not to support them to the utmost would be a cowardly breach of brotherhood and they would forfeit all claim to consideration from their Mohamedan countrymen..”

Thus under the insistence of Gandhi, the Indian National Congress supported the Khilafat movement. Though the struggle was unsuccessful, it was the first struggle launched with the cooperation of both religions. It also helped to build the trust and cement brotherhood between them.

Sadly this earning for brotherhood led to Gandhi’s murder by Hindu extremist group.

A life led by Empathy

“I call him religious who understands the suffering of others.”

Educated at the University College of London, Gandhi could have had an illustrious career as an attorney. He had a promising future when he was offered a job which if done well could make him the legal advisor and lawyer of an established firm in South Africa. But once he came face to face with the plight of Indians and native Zulus in the country, he dedicated his efforts to their prosperity.

Having attained the goals that he set for himself, Gandhi could have basked in glory if he were to stay in South Africa where he led peaceful struggles for 21 years. But in 1914, his empathy for 350 million Indians living under the iron fist of the British government forced him to return to his homeland.

Gandhi understood that his role was more than just fighting against British rule in India. He embarked on a Herculean task to purge the society of poverty, illiteracy, religious tensions, caste differences that plagued the nation. His concept of Purna Swaraj (Complete home rule), though criticized as utopian, focused on the spiritual well being of the citizens.

Even his approach to the British rule was driven with fellowship. He never considered the colonialists as enemies. He had close relationships with British Viceroys Irwin, Curzon and Mountbatten. He even celebrated the British queen’s birthday and respected the British constitution.

“It is easy enough to be friendly to one’s friends. But to befriend the one who regards himself as your enemy is the quintessence of true religion. The other is mere business.”

Today’s world with its fake façade of pleasantries and shallow ‘How are you?’s is missing Gandhian value of empathy. It is undoubtedly the vital factor that gives life to all these meaningless words. In its absence, we feel like zombies. Maybe our spirituality should consist less of insincere words and more of genuine respect and concern for others.

Once we give ourselves to the kindness that Gandhi exemplified, our suffocating self-centered paths will be disrupted for good. There is no turning back from the refreshing wind of freedom. The lanes of empathy will lead to real love and completeness.

Can’t we follow the Mahatma and act out of empathy and thus create a paradise like he envisioned?