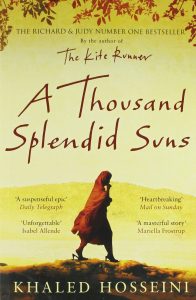 ‘A Thousand Splendid Suns‘ is a 2007 novel by the Afghan-American writer Khaled Hosseini. The story depicts the plight of Mariam, the illegitimate daughter of a wealthy merchant, which happens to get intertwined with that of Laila, a free-spirited young girl who meets with unexpected tragedies.

The story takes place around the harsh political climate of Afghanistan, tormented by insistent wars and unstable government. The story succeeds in presenting the horrors of war and the suffering of innocent people.

The novel consists of four parts.

The first part depicts Mariam. The story starts with Mariam’s innocent childhood, filled with her anticipation of weekly visits of her father Jaleel. By the age of 15, her life takes a drastic turn when she gets married to Rasheed, a male-chauvinist.

Part two introduces Laila, a girl of the next generation, who lives a free life. She and her lover Tariq nurtures their dreams for their future together until the war does them apart.

Part three narrates the fateful events that intertwine the life of Mariam and Laila. Their relationship, which starts off in the wrong foot, gets warmer and a special bond develops between the two as they face the hardships of life together.

The political climate of Afghanistan

Afghanistan, an ancient land with rich cultural tradition which gave birth to great poets and Sufis, was ripped apart by relentless wars. The book sketches three decades of Afghan history which includes rebellion against the Soviet Communist government, continuous battle between tribes and Taliban autocracy which completely over-turned the social and cultural stability of the nation.

Hosseini, being an Afghan himself, succeeds in factually portraying the unforgiving life of innocent Afghans amidst the war. The characters in the novel exemplify the uncertainty, constant fear and sudden orphaning faced by war-ridden citizens.

Throughout the story, the reader braces against a stray bullet or a missile, which will irreversibly change the plight of the characters. Hosseini effectively conveys the premonition of the people living under the shadow of the war demon.

The books cement the notion that the ultimate victim of all atrocities are women. The protagonist undergoes the insipidity of oppression by the male-oriented society. Through her story, prejudice against women’s education, employment and female sexuality in the orthodox society gets dragged towards the limelight.

The writer portrays society’s neglect of the rights of women and children, even at the time of war,  with its full viciousness.

The sting of gender discrimination, evident in the case of Zalmai and Aziza, Laila’s children, even inside the walls of their home, pricks the reader.

The novel reflects the ugly face of social injustice. An emotional depiction of the society’s hostility towards illegitimate children and the pronounced misogyny, achieved through the biography of Mariam, is the primary example.

The pseudo-morality is questioned by the premarital relations between Tariq and Laila while subjugated female sexuality colors the background.

A narrative also effectively mocks the blindness of people who believes one rebel group will throw-off its successor restoring peace in the land. But this hope never comes true and peace remains a mirage.

The novel is a heart-wrenching narrative of the horrors of war and an unlikely friendship interlaced with the spontaneity and inevitability of life. Hosseini succeeds in filling up the eyes of the reader with his simple but beautiful account expressed in non-pretentious language. The characters etch a painful image in the reader which outlives the final pages of the book.

“Every street of Kabul is enthralling to the eye

Through the bazaars, caravans of Egypt pass

One could not count the moons that shimmer on her roofs

And the thousand splendid suns that hide behind her walls”

In short, ‘A thousand splendid suns‘ is a gripping read which chronicles three decades of the Afghan war and a deeply moving account of family and companionship. The book creates sympathy towards war refugees along with a fresh perspective and appreciation for life and freedom.

Thank you for reading. Post your valuable comments in the box below.