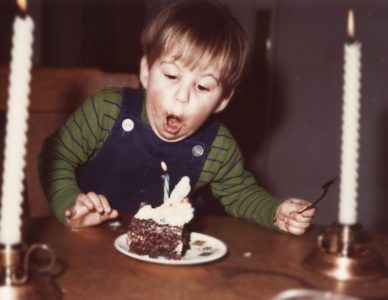 A couple of minutes after 7, on the rainy morning of July 15, my cousin called to give me the news. Though it seemed happy at first, some note in his undertone sounded melancholic.

“Happy thirtieth birthday”, he said. “Welcome to the club.”

I should have guessed then something was terribly wrong. But how could I have known that turning thirty is so messy?

In my twenties, I was a carefree megalomaniac. I ate whatever I felt like eating, hung out with friends well into the unholy hours of the night, changed jobs whenever I wanted and enjoyed life to its fullest. I felt I am intelligent, invincible, and irresistible.  It was pure bliss.

Suddenly, the world as I know it ended. I try to convince myself later that the changes were gradual. But I believe the day I turned 30, or precisely, when the clock chimed 12, something changed. That pivotal moment, that fulcrum of time robbed everything fun and exciting about life.

What is there to be depressed? You might ask. Everyone ages. It is only natural.

Well, let me tell you this. If you are well past your 30, you probably forgot what it was like in your twenties. If you are below thirty, I humbly request you to shut up; you will get there.

To make myself clear, let me share some Christopher Nolan movie-ish confusing experiences I endured.

The moment I turned thirty, I was sucked into the vortex of physical transformation.

The hairs are the first ones to step down. Some of them, without any apparent reason, decided to leave my head, where they happily resided for three decades. Some others, against my wish, sprouted from places where I least wanted them; ears, back, and other unspeakable regions.

Even those who decided to stay with me through these tough times changed their complexion by putting on white socks over their head. Thus I don’t realize these grey ones as mine anymore.

Then it was time for my belly.

Yes, the very one I honed to a pack of six (well, four to be numerically correct). Now, it just wants to show off. By inching out of the Line of Control, it encroached slowly into the enemy territory. It is so rebellious to suppress by force that piling up the number of crunches and leg raises only resulted in a back cramp.

Another is my body weight. No matter how much I yelled in pain in the gym, how tiring the long walks were, how much I ate air and drank water, the weighing scale appeared stuck. Each time I weigh myself, it ominously grins back at me like Lupita Nyong’o in the movie poster Us.

Be advised, checking the scale for errors will only add insult to injury!

Sports, which mesmerized me since childhood, appear lackluster.  The nail-biting matches of cricket and the exciting games of football – for which I labored not to wink in case I missed some magic moments – seems a waste of time now. Everything feels like an extended déjàvu; like you have seen it many times before. Seldom does something new happen that excites me, even for a moment. I blame my age for that.

Then there is your career. Before, I was never bothered about finding another job. I quit not because I got another, but when I felt disinterested. I even used to take a break for a couple of months before embarking on a job hunt.

Now, when I think about splitting up with my low-paying employer, the image of a jobless me, clad in tomato sauce-stained pajamas, binging Netflix all day, haunts me. I have seen my application spurned with no explanation from employers. When they bother to, they come up with lame justifications like I am ‘over qualified’ (really?!) or ‘errr…not as young’ as they want to be (say what??!).

The burden of expectations

All these were the perfect contradictions of what I envisioned about my thirties. I evidently didn’t turn out to be the mature, seasoned, and settled person of my dreams. Instead, I still get emotional over nicknames, still fight with my brother (who is 37, by the way) about who gets the last piece of chicken, and still can’t find a stable job.

I think we never do age mentally. We are children trapped in the overweight body of an adult. I find that many of my apprehensions in childhood have not melted away. The only difference is that the kid who dreaded school now dreads his office.

Their arsenal of why don’ts is unending and almost nuclear in nature. It is now clear to me why Joey, Rachel, and Chandler (Yes, from the beloved sitcom Friends) were grumpy, even crying (Why God? Whyyy?!) when they turned thirty.

As of November of 2021, no one has invented a method to reverse the time flow; believe me, I checked. So there is no way to go back to the good old days.

The only way, is forward.

I think the best remedy for going through the thirties, as with any burdensome experience, is to have a peer support group. Only those who go through the same experience can relate to you. Your good friends will make you happy, by letting you know they are as unsuccessful as you are. So keep them close.

Another technique to deal with your aging is pursuing a passion. It will make us oblivious of the pains of life, at least for some time. Maybe by finding purpose and letting go of the illusion of eternal youth, I can learn to live with being thirty.

But what about the forties?

I don’t dare to even imagine!