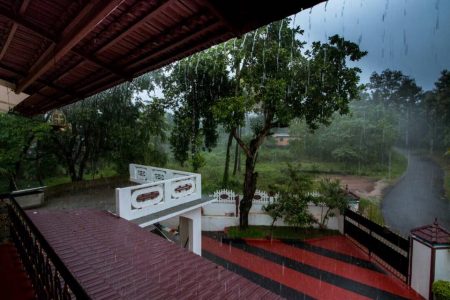 Often my friends say ‘it is unbearably hot in Kerala’, I differ with them and insist that it is not actually hot, rather humid in our place, because of the proximity to sea and the equator. As someone who had lived in middle east, I know what heat feels like. So it was a typical humid afternoon in Kerala. Actually, it was really humid that I felt like jumping into a river and staying underwater as long as I can. By three o’clock the humidity became unbearable and everyone was sweating profusely. Then suddenly a cool breeze gushed in through the window blowing the curtains apart. In the western sky dark clouds were gathering. Within minutes, low rumble of thunder was heard from far away. Winds kept getting stronger and within half an hour, the mild hushing of approaching rain filled the air. It grew louder and nearer. Then slowly it started drizzling. The pitter-patter of water droplets on the leaves and roof became consistent. The smell of wet soil was refreshing. Then it started raining heavily. Blowing strong winds were accompanied by loud thunder and lightning. Like a concert in its pinnacle, the rain was creating wondrous sound effects and strong joyous feelings in me. I sat on the reclining chair on the veranda and while enjoying the rain, a lot of memories filled my heart.

I have always been in love with rain. Growing up in Kerala, where more than one-third of the year is soaked wet, my childhood is filled with beautiful memories of downpour. We children used to play in the rain, much to the dismay of our parents. When they start a tantrum, we would hop in to the house to make paper boats. Some unfortunate ants were also assigned as sailors on the perilous voyage in the turbulent flow of rain water. After the storm, when the trees would be still dripping, we would plod through the cold and damp soil bare footed. Nothing created a stronger feeling of connection with nature. It was great fun.

Coincidentally, my birthday is in July, one of the wettest months in south India. As a child, I remember me going to school in ‘color dress’ as uniform was not mandatory for birthday boys/girls. Coming back from school, the new dress will inevitably be wet and dingy. When I went to the neighbour’s to say ” it’s my ‘happy’ birthday” and distribute sweets , the ruthless winds blew my umbrella away and I ran behind to fetch it. The nights were filled with occasional thunders and the sound of rain falling on the tiled roof of my small house. Sleeping in tight embrace of my mother I felt the warmth of her love and a sense of security.

Even though I really liked rains, I was afraid of thunder storms. My brother Dinu, once while taking a bath got an aftershock of a lightning. Though he was petrified at the time, he made me believe that he acquired some super powers in the process. It meant that I had to share my snacks with him, else he may use his powers on me. This went on for a while until I saw Mr.’Thunderman’ hiding under the bed when there was a thunder-storm!

Sometimes, during our summer vacations, the unexpected rains played the part of the  antagonist and put a quick stop to our spirited outdoor games. My friends used to bad mouth the disruptor of our play time. On the contrary, I felt jubilant. They used to make fun of me saying it was because I was always loosing and the rains provided a  way out by ‘Duckworth-Lewis method’. Thinking back, they had a point.

While doing my graduation, the semester exams coincided with the summer rains. Coming back from the exam, I would doze off as it was very tiring because of the mental strain of exams and physical exhaustion due to the scorching heat. When the evening rains cooled the air, I would have a comfortable siesta and all the stress would melt away and I would become fresh and ready to face the next one. In the rainy nights, I loved riding my motorcycle. Mostly I won’t care for an over coat. The small water droplets would be so cold that they felt like pieces of ice. I loved that.

One of my fondest monsoon memories is the motorcycle ride to Athirappilly, home to a beautiful waterfall, with my cousin Lijo. We rode slowly through the heavy rain and had a wonderful time. The whole journey felt magical as we felt intimately close to mother nature. Though we had to endure an unpleasant amount of scolding from our parents, it was the best time we had together. Lijo is also deeply in love with the monsoon. It is no wonder that his wedding day was filled with a light drizzle. The function would not have been complete if it was not visited by intermittent rains.

While in middle east, I really missed the monsoon. Mom used to capture videos and WhatsApped them to me. The rare trickle in the desert was not as beautiful as heavy downpours in my land. Anyway, I used to go out and watch it as often as I can. It made me nostalgic and reminded me of my home thousands of miles away. On annual leaves, I stood outside my house on rainy days as if to meet a long-lost friend. One of the videos of me running happily in the rain is still going viral in our family groups.

There are some people who always complain of the weather, no matter which season it is. They complain that it is too hot in the summer and it is always raining in monsoon. Mostly people hate when it rains and complain that there is water scarcity if it doesn’t. I have never understood this paradox. Wouldn’t it be better if we just accept the climate as it is, even feel responsible for some of the climate change. I am actually astonished at nature’s humility. In spite centuries of destructive activities by humans, there hasn’t been much repercussions. I am grateful for that.

Nowadays, I like to sit in the reclining chair in the first floor veranda of my home and enjoy a book, while it rains. If there is a cup of hot tea, I would be the happiest person in the planet. Rain, book and a cup of tea is an extremely relaxing combination. It is an image that consoles me when life becomes hectic. Hope that I can reach back home, be in that spot, ruminating on the old memories  and enjoy the monsoon keeps me going.

10 thoughts on “My rain Memoirs”